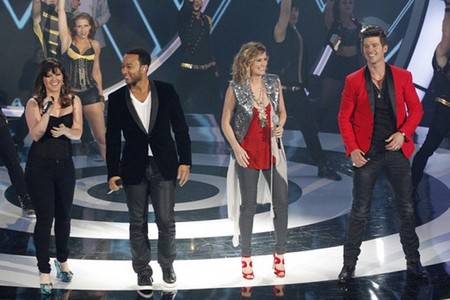 Tonight on ABC is an all new episode of DUETS. On tonight’s show the theme is ‘Party Songs’ so we can expect a to do a lot of singing and dancing to the tunes.  If you missed last week’s show, we have a full and detailed recap here for you.

The comments about his performance from the superstars were: “Robin thought it was lovely and thought he belonged up there. John found it was a little pitchy sometimes, he needed to pronounce his words a little better. Jennifer loved that he choose this song, perfectly suited his voice and loved that he stood on his own.”

Kelly was shocked and before they practiced for tonight’s show she said, “I  was actually shocked that Jason was second-to-last last week … I thought he did a beautiful job of emoting and I thought he should’ve been higher than he was … then when I watched it back, I was like, ‘OK, there were pitchy places I couldn’t hear.”

On tonight’s June 13 12 episode of Duets 2012 the theme is Party Songs and another contestant will be sent home.  Jennifer Nettles and J. Rome will perform Michael Jackson song “P.Y.T.”  Meanwhile Kelly Clarkson and Jason Farol are going with the Rolling Stones song “I Can’t Get No Satisfaction.”

Stay tuned for our live coverage of the show tonight at 9:30 PM EST! Meanwhile, while you ,hit the comments and let us know what you think of Season 1 of “Duets” so far!

RECAP:  Tonight’s episode is “Party Anthem Theme” and the bottom two will have two sing a song for survival before someone is going home. Below are the performances in order of appearance.

Superstar Comments:  Robin was really excited and can’t wait to see what Jason brings to the rest of the show. Jennifer thought it was his best performance so far. John thought Jason was thinking too much even though he enjoyed himself.

Jason’s standing on the Duet’s Chart, his number one! but not for long.

Superstar Comments: Kelly loved how Bridget made it sexy. Robin thought it was amazing. Jennifer loved where the song lead.

Bridget jumps to the number one spot on the Duet’s Chart, pushing Jason down to second.

J Rome pushes the first two hopefuls down the Duet’s Chart, he’s in the number one spot.

Olivia lands fourth on the Duet’s Chart, the rest of the hopefuls stay where they are on the chart.

Superstar Comments: Jennifer doesn’t say that much other than she feels nervous. Robin doesn’t think he felt it. John thought it was ok.

Jordan is third on the Duet’s Chart.

John Legend and Meleana Brown perform “Since U Been Gone” by Kelly Clarkson.

Meleana is fifth on the Duet’s Chart, a far cry from the number one spot she had not so long ago.

Jennifer Nettles and John Glosson perform “Life is a Highway” by Tom Cochrane,

Superstar Comments: Kelly thought it was the perfect song. Robin loved his voice, he would go to see him perform. John thought it was great, it really worked.

John is third on the Duet’s Chart, which means he is safe this week.

This means Meleana Brown and Olivia Chisholm will sing for their lives because they are in the bottom two. Both have to sing with no band, just a cappella. Meleana performs “Saving All My Love For You”, Olvia performs “I Can’t Make You Love Me”.