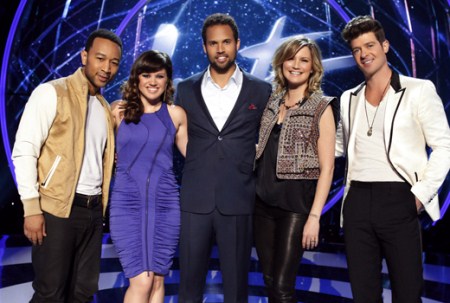 Tonight is episode 3 of ABC’s new talent competition “DUETS”.  American Idol winner Kelly Clarkson returned to television with this new series and so far the show has promise. Did you see the second episode? If not, you can read the full recap HERE.

The highlight last week was the removal of John Legends hopeful, Johnny Gray, although the show gave us absolutely no information on what happened to him, they simply and as quietly as possible, replaced him with Meleana Brown.

The first person to comment about Johnny’s departure was he himself in a series of Tweets: “I promise you bro, if I had been on this week, I would have been #1, GUARANTEE! Did they explain why I’m gone? #Duets”, “It’s not right, but I’ll have my time to talk about it, God works in mysterious ways”, “Don’t get it twisted, Johnny Gray didn’t “drop out” y’all know after being #2 in 1 episode, I was coming back to kill!”, “I’m doing great! BIG THINGS happening over here in Johnny Gray’s world. When 1 door closes, another 1 opens”.

It seems very clear that Johnny did not drop out of the competition and what the heck did Quddus mean when he said “due to unforeseen circumstances”? Did the producers find some kind of illegal activity in Johnny’s past? One thing is for sure, “DUETS” has a lot of explaining to do, it’s not fair to keep viewers in the dark.

On tonight’s episode, inspirational songs will be performed by the celebs and their amateur partners, one of whom will be eliminated.

Don’t forget to come back to Celeb Dirty Laundry each week because we will be live blogging “DUETS” with all the up-to-the-minute details. CDL your one stop shop for all your reality TV and television series recap.

Stand by as we live blog episode 3 with all the up-to-the-minute details tonight beginning from 8pm to 10pm.

RECAP: Jennifer Nettles and John Legend open the show singing “I’ve Got The Music In Me”. Tonight the celebs and their amateurs will be singing songs that inspire them.

Superstar Comments: John loved her voice, it was clear as a bell and well done. Kelly thinks she is captivating and beautiful but she thought there was something awkward, like they didn’t suit each other. Jennifer Love it and didn’t agree with Kelly.

Alexis’ position on the Duet’s Chart is number one (duh!, first that performed).

Jennifer Nettles and John Glosson perform, “How Great Thou Art” by Carrie Underwood.

Superstar Comments: Kelly tells John that he is just too damn good and they both sound like they have been singing forever, great job. Robin said the performance made him thinks of his family and God, wonderful job. John felt everything, they sounded so beautiful, a perfect place for his voice.

John grabs the top position on the Duet’s Chart and pushes Alexis to number two.

Superstar Comments: John love it, he thought Jordan was amazing. Robin calls Jordan as tasty as pie and Jennifer loved that she choose that song, she could hear her voice well, she grew in this performance.

Jordan jumps to number two on the Duet’s Chart pushing Alexa even further down the chart to third position.

John Legend and Meleana Brown perform, “If I Ain’t Got You” by Alicia Keys.

Superstar Comments: Kelly loved the soul in the song, the soft stuff was very well done, nothing awkward, it was good. Jennifer loved the big notes, loved her confidence. Robin thinks it was a great song choice, just beautiful.

Robin Thicke and Olvia Chisholm perform, “Crazy In Love” by Jay-z and Beyonce.

Superstar Comments: Jennifer could tell Olivia was having fun, she sounded great and much better job than last week. Kelly loved her presence and her voice was so special. John loved her legs, loved the way she opened up and embraced it, but wasn’t vocally impressed.

Jennifer Nettles and J Rome perform, “How Am I Supposed To Live Without You” by Michael Bolton.

Superstar Comments: John thinks J Rome is phenomenal and can’t take the emotion from this song. Robin claps. Kelly loves J Rome, she is crying and thinks he is so good.

J Rome jumps to a well deserving number one on the Duet Chart.

Superstar Comments: Robin thought it was lovely and thinks he belongs up there. John found it was a little pitchy sometimes, he needs to pronounce his words a little better. Jennifer loved that he choose this song, perfectly suited his voice and loved that he stood on his own.

Jason jumps to number six on the Duets Chart, which means Olivia is safe.

John Legend and Bridget Carrington perform, “Heard It Through The Grapevine” by Gladys Night and Marvin Gaye.

Superstar Comments: Robin thought she did a great job. Jennifer loved her attitude, the growls, but lows were a little muddy. Kelly thinks she is so comfortable and fun to watch.

Bridget lands in the fourth spot on the charts.

This means Jason Farol and Alexis Foster will sing for their lives because they are in the bottom two. Both have to sing with no band, just a cappella. Jason performs “Me And Mrs. Jones”, Alexis Foster performs “Natural Women”.

Kelly thought the two were pitchy and Jason is her boy. Robin thinks they are both equally talented and give them inspiration to go on whether they stay or leave. John loved the love they bring to the music and congratulates them for even being there. Jennifer thought these performances were so good, so raw and so exposed.