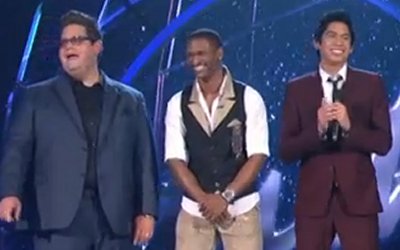 Tonight on ABC the summer of singing is over and the season finale of DUETS airs. Duets featured amateurs paired with established artists Jennifer Nettles, Kelly Clarkson, John Legend and Robin Thicke.  Althought this was the first season of Duets if the rumors are true teamed with the less than stellar numbers, it is the last season.

On last week’s show Bridget Carrington was sent home. The remaining three amateurs sang a duet and a solo. J Rome (Partner: Jennifer Nettles) continued to impress. In addition to singing The Script’s “Break Even” with Jennifer, J Rome provided one of the night’s stand-out performances with his solo rendition of Stevie Wonder’s “Signed, Sealed, Delivered I’m Yours.”  Everyone loves him and John even went as far as to say he would sign him.

Jason Farol (Partner: Kelly Clarkson) sang ‘Me & Mrs. Jones’  and Runaway Baby.  I have to say he is my favorite, he had problems earlier on in the season but seems to have come into his own.  Although he is not really as good as J Rome he does have a huge lickability so i will be pulling for him tonight.

John Glosson (Partner: Jennifer Nettles) sang The Prayer.  Although John is a good singer he is probably the  long shot for the win.  You have to be the full package and he needs to work on his charisma.  If you missed last week’s show, we have a full and detailed recap here for you.

On tonight’s show, the season finale reveals which pairing of superstar and amateur will be crowned the top duo, with the amateur half of the couple winning a recording contract.

Stay tuned for our live coverage of the show tonight for the awesome season finale of DUETS at 8:00 PM EST! Meanwhile, while you wait, hit the comments and let us know what you think of Season 1 of “Duets” so far!

Tonight’s recap:  Tonight is the big finale of the very first season of Duets and the stakes are high.  The show begins with a duet by Kelly Clarkson and Jennifer Nettles.  They do the old Eurythmics classic, Would I Lie To You, and rock their way all they way through.  The end features a lot of extended runs.

Next up is John Legend with his partner, Bridget Carrington.  They whip out the old Rolling Stones classic, Gimme Shelter and totally sex it up.

Olivia returns this week to duet with her superstar, Robin Thicke.  She has a rough time in the beginning of Fever but recovers by then end.  Robin is so smooth and sexy, as usual, he more than makes up for her.

John Glosson is up first of the remaining three. He duets with Jennifer Nettles to the song, For Good, from the Wicked soundtrack. As usual, they strike gold.  Kelly thinks his voice is just beautiful.  Robin loved it and loves everyone tonight.  Jennifer calls John part of her family.

Jason Farol cracks out a really cool rendition of Heartbreak Hotel with Kelly Clarkson for his final performance.  He really worked the performance and shows a lot of growth as a performer, even since just last week. Jennifer feels he has blossomed as a performer and John agrees plus comments on how much fun their duets are to watch.

J Rome takes the stage last tonight and performs the old Debarge classic, Rhythm of the Night alongside Jennifer Nettles. This taps into his joyful personality and the superstars love it. Robin mentions how he is incredible and always smiling.  Kelly tells him he makes her smile on the inside and John loves that J Rome stretches himself every week.

All three are called to the stage and Jason ended up in third place thanks to America’s votes.  Kelly Clarkson tells him not to sweat it because he’s the most improved.  The tension builds and finally, J Rome is announced as the winner of Duets.  He has snagged the Hollywood Records recording contract which means that his dream of making an album is going to come true!

Hit the comments and let us know what you thought of the season and the winner!!!!