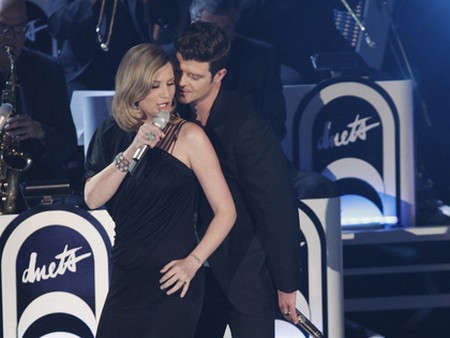 Tonight on ABC is an all new episode of DUETS. On tonight’s show the contestants perform songs chosen by the Superstars and America votes. If you missed last week’s show, we have a full and detailed recap here for you.

On last week’s show it was “Favorite Standards” theme and the contestants brought some great performances. Last week was the second live episode and viewers got to vote. We found out last week who America gave the least amount of votes to and who was eliminated. Olivia and Bridget received the lowest amount of votes, the amateur who was eliminated was Olivia Chisholm.  I don’t know about you but I totally agreed with America!

On tonight’s show during this third LIVE show, the celebrity singers choose songs that best showcase their duet partners’ talent and America votes.

There are only four competitor left so the singers will really have to bring their game tonight.  So how did they do last week?   Well Bridget Carrington perform “Unforgettable” and everyone loved it.  J Rome performed “God Bless The Child” and it was compared to a grammy winning performance.  John Glosson performed “Georgia On My Mind”  and they thought he was amazing.  Jason Farol performed “Feeling Good” and everyone thinks he has improved.  We are going to guess that Jason Farol may be eliminated tonight.  What do you think?  Hit the comments and let us know!

Stay tuned for our live coverage of the show tonight for the awesome episode at 8:00 PM EST! Meanwhile, while you wait, hit the comments and let us know what you think of Season 1 of “Duets” so far!

Tonight’s recap: The show opens up with the Superstars: Kelly Clarkson, Jennifer Nettles, John Legend and Robin Thicke singing “Get Ready” by The Temptations.

Tonight the amateurs will be singing a duet and a solo.  First up is Jennifer Nettles and J Rome performing their DUET.  They are singing “Break Even” By The Script.

Comments: Robin: Thinks it is a great song, he would not hink that it would sound good with his voice, but since he made it sound so good it is a testament to his talent.  John: Everything you sing sounds good with your voice.  Kelly: You did so well, it is great that you are willing to go outside the box!

Comments: Jennifer – Sometimes it takes artists time to find a niche and I love the niche you have found and I love your voice.  John –  I thought last week was better than this week.  I don’t think this song was the best for you.  I think I am a little worried for you.  Robin – I totally see why teenage girls go crazy for you.  What I missed was a little naughtiness in the song.

Comments: John – you are wonderful and your voice is magnificent.  You sound beautiful tonight.  Robin – You were actually off key for one note.  So I was surprise.  But once you got going your voice was magical.  Kelly – There is something super special about your voice it is magic.

This evening’s solos couldn’t possibly be more different from one another.

Up first was J Rome doing the Stevie Wonder classic Signed, Sealed, Delivered, I’m Yours.  All of the stars love this guy and John went as far as to say he would sign J Rome tomorrow.  Second is John Glosson singing Rascal Flatts.   John– thinks that John sang the best solo of the night.  Last but not least is Jason Farol singing Bruno Mars Runaway Baby.  He was definitely the favorite here.  Robin said Jason brought the house down.  John- thinks it’s the right vein for Jason to be singing in and Kelly just hopes that Jason wins.

Did you watch tonight?  Better yet, did you vote? If so tell us your favorite performance of the evening in the comments below!