E.L. James’s ‘Fifty Shades of Grey’ to Spark the Next Great Baby Boom 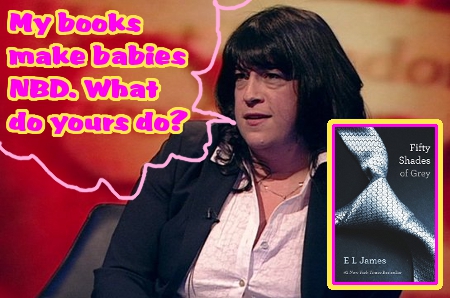 According to The Baby Center (via Contact), “Reading ’50 Shades of Grey’ is acting like an aphrodisiac for women.” People just can’t get enough of this trilogy, which has already sold over 20 milion copies. One of the users on the website said, “I’m blessed that I have two healthy kids but I wanted one more and I was sad,” said Danielle. “Then Christian Grey entered my life.”

One future-mother-to-be even went as far to deem 50 Shades her savior and the reason for her successful fertilization. She said that if she ends up having a girl she’ll be naming it Anastasia, the name of 50 Shades’s  protagonist. If it’s a boy we can only assume the young lad will be forever doomed to bear the name of the world’s most popular sex-novel character, Christian. We’d love to fast forward into the future and take a glimpse of that “Where did my name come from?” conversation between mother and son. AWKWARD.

How do you feel about everyone being so taken aback by these characters? Despite what everyone has to say about this book, the level of trash it exudes, how awful it is to have even been published in the first place, it’s definitely a testament to just how powerful fictional characters — those people gracing the pages of a novel — can be. When it all comes down to it . . . people are reading. They might not be indulging in classy lit fic or reading Shakespearean sonnets, but they are reading. At least people, especially in this evolving digital age, aren’t forgetting the power of story  and the interesting — hey, even sexy — new places words can take a person.