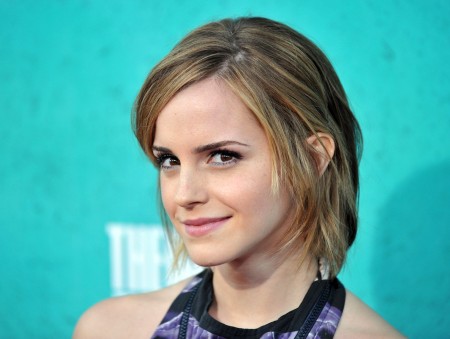 It’s an awfully long road to get from Hermione Granger to Anastasia Steele. Emma Watson looks to be the frontrunner for the Fifty Shades of Grey leading lady. Well, we know she can handle a magic wand so maybe she could try on Christian Grey’s… idiosyncrasies for size.

Showbizspy reports Emma is the favorite among the movie’s producers, Mike De Luca and Dana Brunetti, who have been put in charge for finding the perfect people to bring the E.L. James novels to life. Other contenders for the sweet, innocent and sexually awakened female lead include Kristen Stewart, Mila Kunis and Elizabeth Olsen. But Showbizspy reports there’s just something about Emma’s innocent look that makes her perfect for the role: “Watson is said to have the right looks for the part, combining a degree of innocence with the acting skills to portray the young graduate who gets swept into a world of sado-masochistic sex with a kinky billionaire, Christian Grey.”

Ugh, I know there are a lot of you out there that salivate over these books, but I’m sorry, I can’t get behind Emma on this one. She’s too much of a special talent. She’s currently working with Sofia Coppola and has signed on to work with Darren Aronofsky next. Oh, AND, she’s playing Emma Forrest in the writer’s autobiography, Your Voice in My Head! Emma doesn’t need to play a character that walks around a party with weighted balls stuck up her vag just because her crazy ass boyfriend gets off on it.

However, I could see how she’d consider it. Emma’s been picky with her post-Potter roles and is anxious to strike away from her goody two-shoes image. Let’s just hope she’s not that anxious. Besides, she’s already sort of found that bad girl role in Coppola’s Bling Ring about the rich Los Angeles brats that spent a summer ripping off famous actors. She had to paint on a tramp stamp and everything! Let’s just hold her wild side to that. There’s really no need for her to tie her hands to her ankles and wear a gag while crouching in a corner just to show us she’s grown up. Although, Ryan Gosling is the fave for Christian Grey. I would be down with those two getting it on… NO! NO! I can’t let my mind play tricks on me. They will work together in time, no need to ruin a great collaboration over Fifty Shades of Stupid.

I know. I know. Send me the hate mail. I don’t care. I’m sticking to my guns. If an A-list actor signs up for this movie I will puke in my mouth… then I’ll watch the movie… then I’ll pretend I didn’t like it.