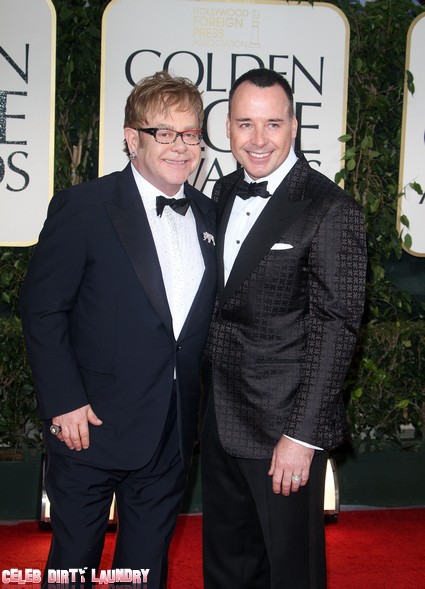 Sir Elton John is not backing away from the feud he and husband David Furnish began with Madonna following this year’s Golden Globes. Elton came right out on ‘Good Morning America’ and said that Madonna will not actually be singing at her much ballyhooed Super Bowl half-time show performance on February 5 – rather the audience will be listening to recorded music and Madonna will be lip-synching! Elton said that Madonna, who is rapidly becoming his rival, if not his true enemy, better “lip-synch good” when she performs at TV’s biggest annual event – to be held this year at Lucas Oil Stadium in Indiana.

Elton was asked on the show if he had any advice for Madonna ahead of her performance, and he replied: “Make sure you lip-synch good.”

Elton went went on to say he would never sing at a Super Bowl half-time show, assuming he was asked, went on to criticize the event saying: “I’ve never seen a decent one. Never ever.”

This blast against Madonna comes after David called Madonna “embarrassing” and “desperate” following her Golden Globes win earlier this month after her song ‘Masterpiece’ from her directorial debut movie ‘W.E.’ beat Elton’s efforts on animated film ‘Gnomeo and Juliet.’ David had some nasty Facebook comments for Maddona following her win.

David wrote: “Madonna. Best song???? F**k off!!!  Madonna winning Best Original Song truly shows how these awards have nothing to do with merit. Her acceptance speech was embarrassing in it’s narcissism. And her criticism of Gaga shows how desperate she really is.”

Yes, Elton John has more talent than Madonna and his musical legacy is greater – but hey, leave the Material Alone, she’s just trying to make a living… and Elton, you and hubby are sounding bitter and jealous.