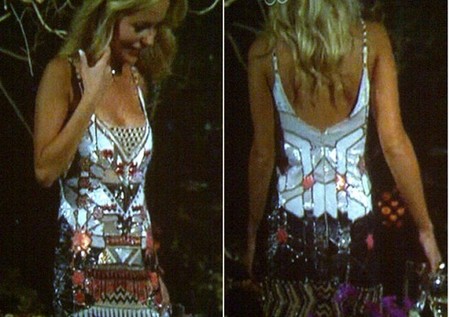 The Bachelorette Emily Maynard has narrowed down her set of suitors to two – Jef Holm and Arie Luyendyk Jr.– but as we have already revealed, Jef Holm is her final choice. Apart from the spoilers and rumors that abound on the internet and say that Jef wins, we ask if there are any concrete clues that indicate that Emily picks Jef over Arie?  The answer to that question is a definite maybe!

And according to Us Weekly that was after Emily settled down! An insider said, “What you see on TV was after Emily calmed down. There was a lot of screaming. Hell hath no fury like Emily scorned.”

Somehow it is hard to see Emily forgetting all about what she perceives as Arie’s deceptive behavior and choosing to select the dude – no matter how much money he has.

And now there is the special dress factor pointed out by William Mantic at Celebs Gather.  William cleverly points out that Emily chose to wear her favorite dress for her date with Jef Holm! Mantic says: According to InStyle, Emily Maynard’s beaded, AllSaints dress was easily her favorite outfit of the week. She just so happened to wear that favorite outfit while with Jef during their date.

InStyle: “The Bachelorette stylist, Cary Fetman, bought [the beaded dress] in London, and it was love at first sight!” claimed Maynard. It is what she said next, however that may be a bit more telling, “I wanted to save it for the right time. I waited so long, we were actually scared we’d run out of time, and I’d never get to wear it!”

So there you have it, Emily and Jef forever, or at least as long as the cameras keep rolling. Emily is in her element – she fancies herself a big star and is well on her way to becoming one. Emily is obsessed with plastic surgery and has had lots of work done in her climb to TV stardom.  Emily will do whatever she can in order to be famous and on TV – in this respect she is intrinsically the same as Kim Kardashian.  Does this make Emily an honorary member of the famewhore club?  Let us know in the comments below.