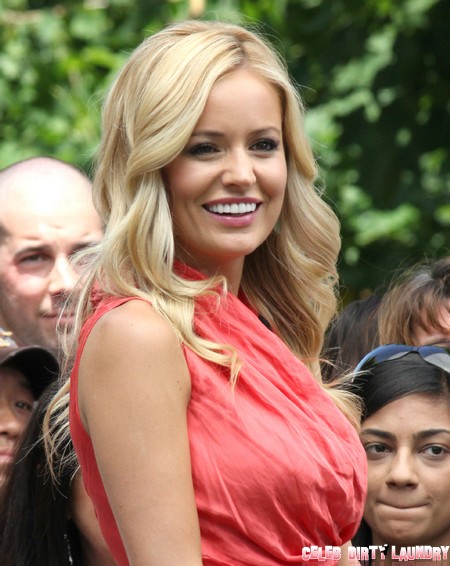 Bachelorette Emily Maynard is hooked on plastic surgery and her ‘natural beauty‘ is the product of extensive and expensive medical treatment. Emily works hard to come across as a natural Southern Belle but the list of cosmetic work she has had done is long. Lucky for Emily she was able to finance her facial and body reconstruction by mooching off of the wealthy parents of her late husband, Ricky Hendrick.

According to a source Emily has been buying plastic surgery for years.  The source says: “She gets regular injections and facials and she looks great!” Emily has also had breast augmentation and a nose job. The source adds: “She had a pretty subtle adjustment to her nose. She didn’t want to look like she had a nose job.”  An insider has confirmed to Reality Weekly that: “She’s from the South where it’s all about being blonde with big boobs… she wanted to look like a pin-up so she went from a 34B to a 36 D.”

Reality Weekly, Print Edition July 2, 2012 exposes the real Emily Maynard, the one hooked on plastic surgery: To watch all-American blonde beauty Emily Maynard worked her way through the roster of eligible young hunks on the bachelorette you’d never believe that she’s wracked with insecurities and secretly hooked on plastic surgery. Emily’s not telling but an insider close to the sweet Southern Bell confirms that 26-year-old Emily has already undergone her share of cosmetic enhancement

“Emily had a few surgeries before the bachelorette, but now that she’s in the spotlight, she visits her doctor regularly,” the insider tells RW. “She’s really good at getting stuff done without looking like she’s gotten stuff done.  People always refer to her as a natural beauty but the girl definitely has some tricks up her sleeve.”

“Emily is a big fan of laser-light facials because it makes your skin look poreless on camera and the makeup glides on much more smoothly,” according to the source. “She also gets Botox to give her brows a slight arch, and she’s had filler under her eyes. “She’s considering getting some lipo,” the insider tells RW. “She panics when she has to be in a bikini on camera.”

The prediction is that Emily will continue to take full advantage of all available cosmetic surgery now that she is a full-blown Hollywood star.  She craves being in the limelight and has learned the lesson that looks are everything.  What do you think?  Is Emily a fake or is she simply responding to the incentive structure she perceives in our society? Let us know in the comments.  Is beauty only skin deep or is it everything?

You can follow The Bachelorette live recaps and spoilers right here on CDL!