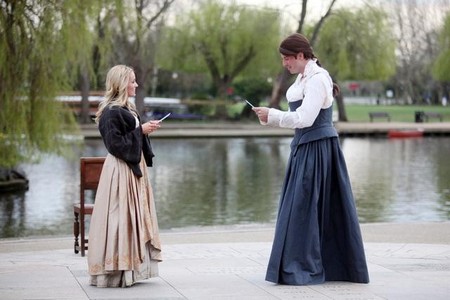 Tonight The Bachelorette 2012 Emily Maynard and her remaining 10 Bachelors head for London. ABC will air the fifth episode of The Bachelorette between 8PM – 10PM EST and we will be covering all the drama for you.

On last week’s episode the drama continued when Chris called out Doug to discuss the age issue and wanted to know why Doug thinks he is the better man for Emily. Doug called Chris immature and started to laugh. Chris was really serious and just wanted Doug to know that he is not going to stand down to him. The two guys that headed home last week were Charlie and Michael. If you missed the episode and you wanna get caught you can read our full and detailed recap here.

Official ABC Synopsis of tonight’s episode: Eight lucky bachelors meet Emily at Stratford-upon-Avon on a group date. Some of men embrace the opportunity to become thespians for the day, acting in scenes from Shakepeare’s famous “Romeo and Juliet.” Emily hopes they all have a blast, since part of being a parent is learning to go with the flow. A confident Ryan relishes playing Romeo and having the opportunity to kiss Emily for the first time.

Arie is terrified when he discovers he must dress like a woman to portray the nurse. Kalon is so fixated on his performance, he shoos Emily away so he can get more rehearsal time. The live audience that gathers gets a lot of laughs as the men perform their scenes with Emily playing Juliet, but Ryan’s kiss as Romeo rocks the rest of the guys to their core.

We will be live blogging ABC’s The Bachelorette episode 5 tonight with all the up-to-the-minute details from 8PM – 10 PM EST so make sure to come back to this spot and watch the show with us. Refresh often to get the most up-to-date results! While you wait for the recap you can check out a sneak peek video and some spoilers for tonight’s episode HERE.

RECAP: Tonight’s episode begins with the first coveted one-on-one date and Sean is the first one to get it with his date card giving a clue about what to expect, “Love takes no prisoners”. You can only imagine how jealous all the guys are and Kalon looks like he has just about had enough.

Emily and Sean head out on a double-decker bus for a tour of London. Meanwhile, Kalon can’t help himself by whining that Sean got the date and not him.

On their date, Sean takes a try at “Speaker’s Corne” and in front of everyone, he confesses that he hopes to find in the love department one day. The two share a romantic kiss at Buckingham Palace and Emily seems to be really impressed with him, he gets a rose.

Meanwhile, the group date card has arrived and it’s a “Romeo and Juliet” date. All the men get to go, except for Jef whose name was not on the card so this means he is getting a one-on-one and Kalon is even more pissed that he didn’t even get the second one-on-one date.

It’s time for the group date, but Emily doesn’t feel so well, she has lost her voice. The group date is located where William Shakespeare was born, Stratford-upon-Avon. The group date will include a performance of “Romeo and Juliet”. Arie is doing well, but he is dressed as a woman.

It’s time for the group date, but Emily doesn’t feel so well, she has lost her voice. The group date is located where William Shakespeare was born, Stratford-upon-Avon. The group date will include a performance of “Romeo and Juliet”. Arie is doing well, but he is dressed as a woman.

Kalon is forgetting that he is on a group date, he is acting more like this is a serious role and he is a Grammy award winning actor. Ryan gets a smooch out of Emily. After their hand at acting, Emily and the guys head to a pub for a beer. Ryan moves in again, takes Emily away from the guys and gifts her with a necklace, she adores it.

Kalon puts his foot in his mouth by calling Emily’s daughter “baggage”. Arie and Chris are not impressed and Doug takes it personal because he is a father.

Doug tattle tells to Emily about Kalon’s comment and she is ready to face him in front of everyone.

Kalon gets put on the spot in front of everyone, he called Ricki baggage and Emily is ready to go off on him. Emily gives Kalon his own line back, “I love to hear you talk, but when I am done”. She goes on to tell him that she feels sad for him, then she says “get the f*ck out, your mother was also a single mother, how dare you, this conversation is so insulting, it’s not even going to happen.”

Emily goes back to see the rest of the guys and tells them that she is really bummed out that nobody mentioned to her earlier what kind of man Kalon was. With that being said, she is not giving a rose out to any of the men, she’s going home to her little girl.

It’s time for Emily’s date with Jef, they are having afternoon tea. The first order of the day is to learn etiquette and poor Jef hates the whole lesson.

Jef brings up the subject of Kalon and tells Emily that he was there when Kalon called Ricki baggage, Emily seems impressed that he opened up to her. Jef says, “if Riki is baggage then she is a Chloe handbag”.

Jef and Emily head to the London Eye for dinner, Emily is really happy with how the date has progressed. She confides in Jef that Kalon broke her confidence. Jef tells Emily that he is really impressed that she told Kalon to get the f*uck out. He also tells her that he really feels that they could have something great together because they have the same goals and outlook on life. Emily gives Jef the rose. Jef is such a gentleman, he asks Emily for a kiss, of course she says yes and boy was it romantic, they top off the long smooch with a hug.

At the Cocktail Party, Emily rakes all the guys over the coals. Ryan has no problems, he is smooth and rocks Emily’s Cocktail Party.

Time for the Rose Ceremony, only six roses to hand out and another guy is going home tonight.

Next week, Emily and her men are heading to Croatia.