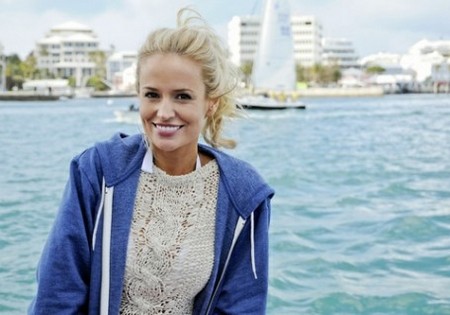 Tonight a whole new episode of The Bachelorette with Emily Maynard airs on ABC and they are heading to Bermuda.  Stand by as we live blog the episode with all the up-to-the-minute details.

On last week’s episode the drama continued with Kalon when he painted his own impression for Emily and it’s not a good one. Kalon doesn’t like to be questioned or interrupted for that matter and when Emily does just that, he says “I love hearing you talk, but can I finish first?“. Yikes!  At the end it came down to Nate and Stevie, with Stevie getting sent home.

He obviously wanted to stick around but I think she saw him as a party guy when what she was looking for a family man.  If you missed the show you can read our full and detailed recap here!

On tonight’s episode the remaining bachelors pack their bags and head off on their romantic global tour with Emily in Bermuda and they have to brace themselves for some stormy weather.

John and Nate get the dreaded “two-on-one” date where one will be going home after jumping off a cliff and taking a luxurious yacht ride. The three head to Bermuda’s oldest cave for dinner where Emily spends private time with each man.

We will be live blogging The Bachelorette tonight with all the up-to-the-minute details at 8PM EST so make sure to come back to this spot and watch the show with us. Refresh often to get the most up-to-date results!  While you wait for the recap you can check out a sneak peek video and some spoilers for tonight’s episode HERE.

RECAP: Doug finds out that he is going to have alone time with Emily as he gets the one-on-one date. Doug and Emily spend the day enjoying St. George and just acting like tourists. Emily starts drilling Doug and finds that he really has no flaws, but the way neither does she; except for not going to the gym! At the end of the date, Doug does get a rose.

It’s time for Emily to spend time with eight men on their group date where they will learn sailing techniques. The men have to compete in races against each other and the stakes are high because the losing team goes back to the hotel.  It’s the yellow team that crosses the finish line; Jef, Ryan, Arie, and Kalon head to the After Party.

Ryan makes a complete ass out of himself when he calls Emily a “trophy wife.” Arie gets lip locked with Emily. Jef gets alone with Emily but he is too nervous to kiss her.

Emily gives Jef the group date rose and he is completely shocked, he didn’t see this one coming.

Emily is going it to her two-on-one date with a positive attitude. They are pulling up to a small island, then they will jump off some cliffs. Emily is having a fun day with John and Nate, but there is a decision to make tonight when she only has one rose.

Emily takes the men into a secluded cave for dinner and it’s awkward all around. Emily has some alone time with Nate and finds that she loves how positive he is. John’s time now, he tells Emily that he loved the two-on-one date because it is easier than a group date. John gets the rose, Nate goes home.

It’s time for the rose ceremony and Emily wants the guys to ask her any questions they have instead of talking to each other.

A lot of the men are getting some one on one time with Emily. Sean wants to let Emily know what is on her mind, Emily talks first and tells him that she feels strongly about him. Sean holds her hand and asks how Ricki would handle her getting married, Emily tells him she would be fine and Sean plants a few kisses on her.

Doug is really jealous when Emily calls Chris out for some alone time. Chris comes clean and tells her that he is upset because some guys think he is too young and unable to be a father figure.

Chris then calls out Doug to discuss the whole age thing and wants to know why Doug thinks he is the better man for Emily. Doug calls him immature and starts to laugh. Chris is really serious and just wants Doug to know that he is not going to stand down to him. Doug calls Chris insecure, he is really pushing Chris’ buttons. Chris tells Doug that he is over the top and doesn’t believe anything he says, it pisses him off.

Emily confesses to Chris Harrison that she is really smitten with Arie, but there are a lot of questions when it comes to the other guys. Emily is a little worried about Ryan, she finds he is very manipulative.

Two guys are going home tonight, what is she going to do? I won’t go over all the guys getting roses, but when Chris got one, Doug looked like he was going to jump forward and knock the guy down.

The two guys that are heading home tonight are Charlie and Michael.