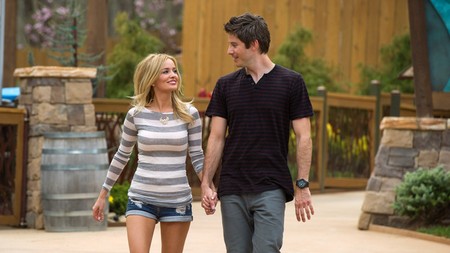 Tonight a whole new episode of The Bachelor with Emily Maynard airs on ABC.  Stand by as we live blog the episode with all the up-to-the-minute details.

On last week’s episode Kalon was sitting by himself away from the guys because he felt that there were painting him as an outcast because of his confrontation with Doug. If you missed the premiere episode you can read our full and detailed recap HERE.

On tonight’s episode the drama continues with Kalon when he paints his own impression for Emily and it’s not a good one. Kalon doesn’t like to be questioned or interrupted for that matter and when Emily does just that, he says “I love hearing you talk, but can I finish first?“. OMG, can you believe he actually said that? Well, rumour has it that Emily tells him to “get the f*ck out” and I can’t wait. Isn’t always fun to have a villain?

Some of the men will face off with Emily’s friends. Arie is spotted out on a 1 on 1 date with Emily,and they appear to have a great time At one point, Arie is kissing Emily, so it definitely looks like they got along well.  It seems like  it’s going to be a very, drama-filled, night.

We will be live blogging The Bachelorette tonight with all the up-to-the-minute details at 8PM EST so make sure to come back to this spot and watch the show with us. Refresh often to get the most up-to-date results!  While you wait for the recap you can check out a sneak peek video and some spoilers for tonight’s episode HERE.

RECAP: This week’s episode begins with Emily having breakfast in bed while talking with her mom as Ricki runs nearby. There are only 16 men left this week and Chris gets the date card right off the bat.

Emily says Chris has been near the top of her list from the start so she’s thrilled to be with him. He’s sweet and mature and everything she hoped for as the take an evening stroll in downtown Charlotte. Then comes the surprise, in order to have dinner together they first have to scale the side of a building. As they are climbing it starts lightening- huge bolts- and Emily is beginning to get really scared and half cry. Chris is cheering her on (as are fans on the ground) and she refers to him as a calm presence. Chris passed the test and stayed by her side all the way up. He wants to kiss her at the top but holds off unsure of whether it’s the right time.

They start their rooftop dinner complimenting each other. Clearly there is a strong mutual attraction between them.

Back at the house Tony is on the phone with his son and contemplates the sacrifice he is making to leave him behind in order to have a chance with Emily.

Meanwhile Chris is doing his best to assure Emily that his being 25 is not a detriment and that he is ready for everything she brings to the table- Ricki included. She feels like he is more mature than her in some ways and she ends up liking him more than she thought she would. He, in true gentlemen fashion asks permission to kiss her and she dares him to try and see the reaction he’ll get. Of course it’s a good one and of course he is awarded a rose in the end.

Next up is a group date for Emily and a group of the guys. Sean is hoping to sneak some time alone with her during the date. The guys are in for a shock. This group date will include Emily’s four best, most protective friends. She tells her friends that no questions are off limits. They are ready to grill the guys to sort through the good looks to get to the actual good qualities that would win Emily over in the end. Plus, they are all moms so the guys better watch out, these women will mean business!

Tony is a shoe in here because he is a dad already. Doug as well. Both are very comfortable with the moms. John went through the wringer for obviously having cheated in the past. The guy with the egg hasn’t a chance either. Sean’s up with the ladies and they seem to like him. Visually of course, but he also seems to have a lot of the values and priorities that Emily would require of a husband. Next surprise after surviving the friends is the pile of kids. The guys got to hang at the park with a bunch of kids and three or four seemed to really hold their own. Ryan told her if she got fat he would love her but not “love on her”. Bad move.

The crew heads to Butter for dinner with Emily. Emily is excited to spend more time with Doug and Sean. Sean tells Emily he hasn’t settled or dated anyone in a year. He wants what his parents have. His dad is so in love with his mom and that’s what he is looking for. He says Emily’s girlfriend’s remind him of his buddies wives so he was comfortable with them. Doug has been through a ton. His mom left when they were young and he and his siblings were in and out of foster homes. He makes a real impression on Emily. Meanwhile Tony is starting to get shaky about leaving his son. Every time he speaks with her he seems to focus on his son rather than getting to know her. Emily ends up being his cheerleader and kind of pep talking him. I suspect she will send him home sooner rather than later so that he can be with his son. Tony ends up outside during the group date near tears. He says he is staying and he should be there to vie for Emily but if he really believed that then he wouldn’t be missing time with Emily. Doug actually steps outside to try and talk to and encourage him. He tells him it’s ok to be taking time for himself but I’m thinking Tony doesn’t believe it. Emily eventually comes outside into the alley to find him. On the spot she decides to send him home. I don’t think it clicks at first that she has cut him. She clearly made the right choice for both them.

Arie, the race car driver, gets the next date card. Emily decides to take him to Dollywood, which to Emily is the happiest place on earth. She doesn’t “do” rollercoaster’s but Arie gets her on one anyway. She feels like he is completely out of his element but adapting well. They sit down alone on the stage to try to write a love song and who should show up but (you guessed it), Dolly Parton. Emily is stunned and says, “I could die.” No less than twenty times. She is a huge fan of Dolly’s and gets a few minutes for girl talk. Dolly tells her she and her husband have been together for 47 years and that true love happens. Dolly sings them a song of course and Dolly thinks there’s something special between this (first-date) couple.

Emily ends up talking to Arie about the situation with Brad. She feels maybe Brad wasn’t ready to be a husband and father. Arie reassures her that he is ready for such important steps. Arie gets the roses by dates end, as I kind of expected he would. Arie says he could see himself proposing to her. They share quite a kiss on the carousel. She doesn’t want to screw up with him because she believes that a man like Arie is hard to find.

We’re almost up to the final rose ceremony and as usual Emily is letting Ricki help her to get ready. Before she heads into the ceremony she decides to pull Kalen aside to chat. He expresses disappointment at not getting a date this week. He also basically scolds her for interrupting him. Fatal mistake. As she puts it she doesn’t like, “Tall, skinny and condescending.” Alessandro also tells her he views taking on the responsibility of a wife and child, as a “compromise”, because it costs him his freedom. Emily semi-argues that it would actually be an honor but he clearly disagrees. He may have just gotten himself sent packing by the end of this episode.

Oh wait. I was wrong. She got up off the chair and walked him right out the door just like that. Emily means business!

To offset Alessandro’s ignorance, Sean steps up and tells Emily that if they were to end up together, in his mind and heart, Ricki would be his daughter. Now we’re finally up the this week’s rose ceremony. Emily thank’s the guys for being there and reminds them that she is giving up time with her daughter to be with them on this particular evening.

It comes down to Nate and Stevie, with Stevie getting sent home. He obviously wanted to stick around but I think she saw him as a party guy when what she was looking for a family man.

Next week the remaining thirteen contenders will join Emily in Bermuda. Fights, injuries and judgmental comments are coming in the next episode.