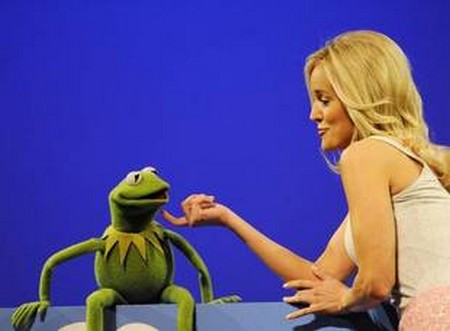 Tonight a whole new episode of The Bachelor Emily Maynard airs on ABC.  Stand by as we live blog the episode with all the up-to-the-minute details.

On last week’s show Emily Maynard met the 25 men she had to choose from and this season.  By the end of the show there were 19 men still in the running toward becoming Mr. Maynard. If you missed the premiere episode you can read our full and detailed recap here.

On tonight’s show for the 19 men remaining in the competition it is going to be tough.  The guys learn that not every man is going to gets dates before the next “rose ceremony”.

On the group date tonight, 13 men perform with Emily and the Muppet, including Kermit and Miss Piggy, benefiting “The Ricky Hendrick Centers for Intesive Care” at The Levine Children Hospital. Now there is one guy that is going to have an extreme panic attack, I wonder who it is?

We will be live blogging The Bachelorette tonight with all the up-to-the-minute details at 8PM EST so make sure to come back to this spot and watch the show with us.  Refresh often to get the most up-to-date results!  While you wait for the recap you can check out a sneak peek video and some spoilers for tonight’s episode here.

RECAP: The men join Chris in the courtyard and tells the guys that each week they will be going on dates with Emily, on the individual ones, they need to have their bags packed because if Emily does not give them a rose, they are going home. Also, not all of the men will be going on dates. Chris leaves the men with the first date card, Chris is hoping it is for him, but it’s for Ryan and Emily wants him to be her “king in the queen city”.

Alejandro and the rest of the guys are jealous that Ryan got the first date card. The guys are hanging out by the pool when Emily walks in wearing regular clothes and picks up Ryan. The two drive off and when they arrive at Emily’s house, Ryan helps take in the groceries and then the two bake cookies for Ricki’s soccer club. Ryan totally passed the cookie test.

Back at the mansion, the men are wondering if Ryan will meet Ricki today. Emily and Ryan drop off the cookies to the soccer field, but she wants Ryan to stay in the car.

The two get all dressed up and go out to a romantic dinner, Ryan proposes a toast to Emily finding what she is looking for and hoping that it is him. Emily cuts right to the chase, she wants to know about his ex-girlfriends, he tells her that there were only two serious ones. Emily tells him that she doesn’t want to be the prize, she is looking to fall in love. Ryan gives her advice, to pick the guy that has the best intentions.

At the mansion, another date card arrives and it is a group date this time. This sets the stage for a few he stage for love, a few of the guys are nervous, but kalon is in his element.

Emily has one more surprise for Ryan, one of her favourite bands is going to play for them. Emily did give Ryan the rose and she found this date to be absolutely perfect.

The next day, Emily is with the 13 guys on the group date and they are excited when they meet Miss Piggy and Kermit the frog. Miss Piggy is already vying for Emily’s leftovers. Fozzie announces that the guys will be doing stand up comedy and Charlie looks like he is going to faint. The event will benefit “The Ricky Hendrick Centers for Intesive Care” at The Levine Children Hospital.

Charlie asks Emily for some alone time and confides to her that he doesn’t think he can do the sketch because he has a speech problem because of an accident that he was in. Emily completely understands and they agree that he should perhaps just dance on stage.

The show begins and Miss Piggy tries to steal the spotlight from Emily, but the show goes on and the crowd loves it. Miss Piggy puts Charlie on the spot and he nails it. Kermit and Emily do a skit together and Miss Piggy breaks in. Emily invites her daughter Ricki on stage with her to sing with Kermit and Miss Piggy, they sing “Rainbow Connection”. The event raised $20,000.00 and the guys all join Emily on stage to sing the rest of the song.

It’s time for a little get together for Emily with the guys after the show and there is a rose on the table that heats up the competition. Emily sits down with Jef and is wondering if he is really into her because she can never find him.

At the mansion, another date card arrives and this one is for Joe, Emily wants him to “get close to her heart”.

Back on the group date, Emily is dancing with Stevie when all of a sudden Kalon interrupts. The two start to talk when Aaron interrupts them and Kalon is not impressed but won’t be confrontational. Kalon starts complaining to the guys but Stevie tells him that he did the same thing so doesn’t understand what his problem is. Stevie and Kalon clearly do not like each other, but Emily doesn’t notice it yet. Time for Emily to give the date rose to is Jef.

It’s time for Joe’s date with Emily, they head to the airport, there’s a red carpet and a jet, Joe’s breath is taken away. The private jet takes them to West Virginia to the charming Greenbriar resort, which is very close to Emily’s heart.

The guys back at the house are talking about jumping in as a father to Ricki. Kalon reveals that he always thought his first kid would be his. Kalon makes a comment that Doug put being a father on hold and Doug lays right into him. What a jerk Kalon is! Doug then asks Kalon if he thinks Emily put Ricki on hold.

On the date, Emily comes down the staircase in a beautiful pink gown and Joe is speechless. They walk into a room for a private dinner and Joe tells her that he is so honoured and thrilled to be there. The two start talking about what they want in life and after speaking, Emily still doesn’t feel the butterflies. The two have written their dreams down and put them in the “love clock” but it doesn’t work because  Emily just doesn’t feel it. Emily starts crying when she tells Joe that she doesn’t feel that she and Ricki fit in his life. Joe realizes that this is not going to happen and bows out gracefully, but Emily is really upset about having to send him home.

Meanwhile, the guys are shocked when a driver comes in and takes Joe’s bags, nobody saw this one coming.

Joe not returning to the mansion has really set the bar for the other guys because now they know that Emily is serious about finding someone that connects with her. Ryan is with Emily when Tony walks in. Ryan has written her a poem and will not give up his time with Emily, but at the same time poor Tony is standing there and waiting to spend time with her. It is not the most comfortable position for Tony but at the same time, there was no way that he was leaving.

There were seven pieces of paper in Ryan’s poem, he should have waited for another time to give it to Emily. Tony finally sits down with Emily and tells her about his five year old son, Taylor. Tony goes on to pour his heart out to Emily and is thrilled that he finally got the chance to build a connection with her.

Kalon is sitting by himself, he feels the other guys are painting him as an outcast because of his confrontation yesterday with Doug. He sits down with Emily and gets some alone time, but Doug is not that far behind him to have his turn. John “Wolf” has a rule that’s hilarious, if a guy has Louis Vuitton luggage then he is a bleep bleep. ( I hate when the censor it)

Time for the Rose Ceremony, Ryan and Jef already have roses and have nothing to worry about tonight. Here are the guys that Emily gives a rose to; Kalon, Arie, Michael, Nate, Sean, Chris, Doug, Travis, Tony, John, Alessandro, Charlie, Alejnadro and the final rose goes to Stevie.

The two guys going home are Aaron and Kyle.