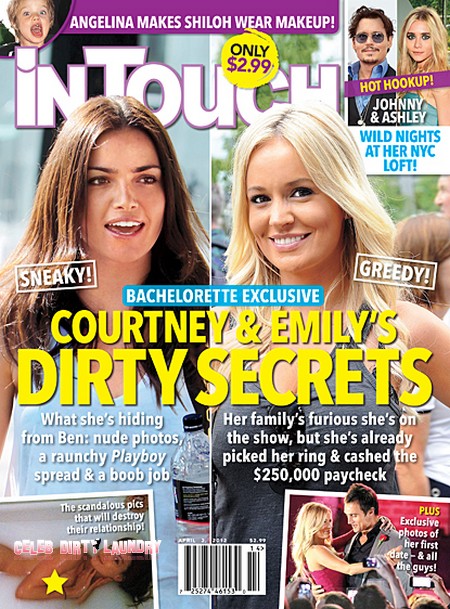 The April 2nd issue of InTouch features the cover story ‘The Bachelor’s Courtney & Emily’s Dirty Secrets.’  The magazine claims to have an exclusive on what sneaky The Bachelor winner Courtney Robertson is hiding from Ben Flajnik.  They have nude photos, a raunchy Playboy spread and details on her boob job.  They claim the scandalous photos will destroy their relationship.

Add to all this it has been rumored that Bachelor Ben cheated on his bride-to-be, Courtney.  She spoke out in her first interview since the show wrapped to say she has faith in her man.  She said: ‘Of course, initially it was upsetting. But at the end of the day, if I didn’t trust him, I wouldn’t be with him, period.’  So what do you think do these two have a chance of surviving?  Was it all just a a showmance?

25-year old, Emily Maynard is the new star of The Bachelorette‘s eighth season. Emily is no stranger to the ABC franchise, she fell in love with Bachelor Brad Womack and won the final rose in season fifteen.  InTouch is claiming that Emily is greedy and her family is furious she is back on the show again.  Apparently she’s already picked her ring out and cashed the $250,000 paycheck.

They have the exclusive pics of Emily’s first date and all the Bachelors competing for her love.  Will you be tuning into the Bachelorette this season to see who Emily chooses?  Sound out in the comments below and let us know!  We posted some spoilers, the first casualty and more here.  Warning they are spoilers – so don’t click if you don’t want to know :-)