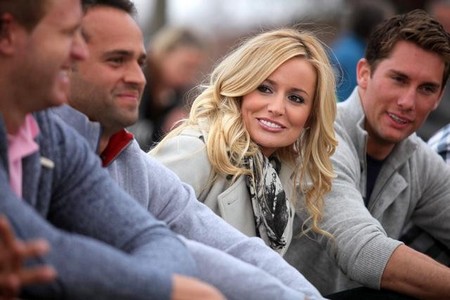 Tonight is an all new episode of The Bachelorette 2012 Emily Maynard, have you been watching the show? We have gotten our hot little hands on a preview of of tonight’s episode of The Bachelorette and some juicy spoilers, enjoy!  Things are just starting to get heated up and Emily confessed that she is really falling hard for race car driver Arie.  Did you see last week’s episode, if you missed it, you can read our full recap here.

Last week things really started to get insane when Chris called out Doug to discuss the whole“age” thing and wanted to know why Doug thinks he is the better man for Emily. Doug called Chris immature and started to laugh. Chris was really serious and just wanted Doug to know that he is not going to stand down to him.

Doug called Chris insecure and really started to push Chris’ buttons. Chris told Doug that he is over the top and doesn’t believe anything he says, it really pissed him off.  The two guys that headed home last week were Charlie and Michael.

On tonight’s show, we will see the 10 remaining men go to London with Emily and things are really going to explode when she finds out that one of the men referred to her daughter, Ricki, as “baggage”. Who is this horrible man? It’s Kalon and Emily is going to through him out with some very harsh words.

The first one-on-one date will be with Sean and the two will go on a bus tour, then a romantic dinner. Does Sean Get a rose? Yes.
On to the group date, eight men; Doug, John, Ryan, Chris, Kalon, Alejandro, Travis, and Arie play “Romeo” with their “Juliet” played by Emily.

The second one-on-one date will be with Jeff and he also gets a rose.

At the rose ceremony, only one man will go home because of Kalon’s departure, stay tuned to find out who it is, although the rumours are leaning towards Alejandro.