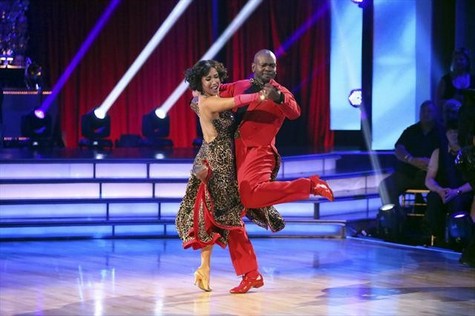 Emmitt Smith danced the Foxtrot for her reinterpretation of an iconic dance on DWTS.  Emmitt and Cheryl chose to recreate Mario & Karina’s season 3 paso doble  on Dancing With The Stars All-Stars 2012 Season 15 tonight.  All the 11 remaining couples hit the stage tonight to reinterpret an iconic “DWTS” dance and face a double elimination on this week’s Dancing With The Stars.   If you missed the show, we recapped tonight’s show for you and if you want to see how all the couples did go HERE!

Emmitt Smith and and professional dancer Cheryl Burke, dancing the Paso Doble.  Cheryl said this about their dance tonight, “We have something in store that I think Emmitt really likes and so hopefully we come out and shine next week.  It’s a song that he loves and we’re going to just try and…” Emmitt breaks in to do a strong matador stomp. There you go!”

Judges’ Comments:  Len: “I don’t know if you killed the bull, but you have presence. I would have preferred more finesse here and there.”  Bruno: “The raging bull is back, you really got it, you were so tough but at times, you need to watch your shoulders.”  Carrie Ann: “You were the human torpedo, your posture fantastic, it was good, it was awesome.”

Watch the video below and let us know what you think? Do you Emmitt did enough to win the Mirror Ball Trophy? Sound out in the comments below!