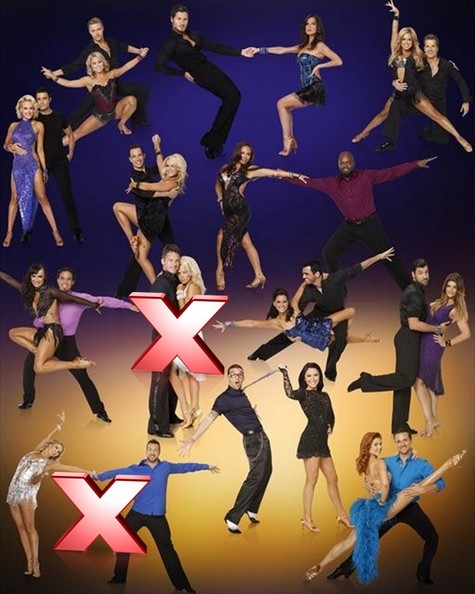 Tonight on ABC the glitz, the glamour and the drama returns once again to the ballroom on Dancing With The Stars All-Stars as we see the third performance show of the season. On tonight’s show the 11 remaining couples reinterpret and iconic “DWTS” dance and face a double elimination on this week’s Dancing With The Stars.  If you missed last week’s performance show you can see a full and detailed recap here!

On last week’s show Bristol Palin and Mark Ballas danced the Quick Step and they were at the bottom of the leaderboard with 18/30.  Bruno sarcastically quipped about their dance that it was like “the Quick Step in the Wild Wild West.”  However Bristol was safe for the evening and in a shocking elimination Joey Fatone and professional dancer Kym Johnson were eliminated.  If you missed the show you can see a full and detailed recap here!

On tonight’s show the couples will be dancing iconic numbers this week. What is an iconic dance on DWTS we hear you ask? According to the DWTS Wikipedia page, “Celebrities must chose an iconic routine from the previous fourteen seasons and perform it but try to make it as ‘iconic’ as it was previously.” We’re already cringing in our chairs! This will be the first time ever that the celebrities “have taken charge of the creative direction of the routine”.  The remaining celebrities will have to be twice as good tonight because tomorrow two celebs will be going home!

Tonight’s episode is going to have all the usual glitz and glam in the ballroom, which you won’t want to miss. So be sure to tune in for our live coverage of ABC’s Dancing With The Stars All-Stars Week 2 Performance Show – tonight at 8PM EST!  While you wait for our recap, hit the comments and let us know what you thought of last week’s episode of Dancing With The Stars All-Stars.

Len: “Cha Cha Cha is not an easy dance, you had it perfect, I liked the concept and the content, it was terrific.”

Bruno: “It worked with Channing Tatum and it worked for you.”

Carrie Ann: “I thought the creative direction was great, your moves were tight and precise.”

Len: “Your hold could have been a little tighter and your footwork a little cleaner, overall it was great.”

Carrie Ann: “You are so good at the drama, you were amazing but a little out of sync.”

Len: “That was what I’m talking about, great technique.”

Bruno: “Melissa you are the Samba Sensation, it was great choreography, you did it like a star.”

Carrie Ann: “That was fantastic, everything was great including the technique, it was stellar.”

Len: “Fluidity of movement, great musicality, I would have wanted better hold but it was terrific.”

Bruno: “It was sensual, classic and classy. At times your hands move out when you glide, but it was exquisite.”

Carrie Ann: “I thought it was absolutely stunning, I loved the statues and I loved his arms were perfect, it was all right there.”

Len:  “Where did that come from? Terrific expression in your face, perfect musicality, fabulous.”

Bruno: ”It was a defining performance, we saw the dancer and the actor, it was wonderful.”

Carrie Ann: “You guys are the couple to watch, that chemistry, amazing.”

Len: ”I want the celebrities to be in charge of the choreography every week, it was the whole package.”

Bruno: “I nearly burst a gut, it was the most fun I have had up to now.”

Carrie Ann: “Thank you, that was the most I have had, it was perfect and your best dance this season.”

Len: “It was full of risks, full of great technique, a fabulous routine.”

Bruno: “Maximum fire power, a touch of scary spice, you really are a great dancer.”

Carrie Ann:  “It was about the creative concept and I don’t feel like you brought us anything new, it was still outstanding dancing.”

Len: “I don’t know if you killed the bull, but you have presence. I would have preferred more finesse here and there.”

Bruno: “The raging bull is back, you really got it, you were so tough but at times, you need to watch your shoulders.”

Carrie Ann: “You were the human torpedo, your posture fantastic, it was good, it was awesome.”

Len: “This dance deserves to be back next week, it was top notch.”

Bruno: “It was absolutely brilliant in the beginning, but when you stepped on her dress it went down.”

Carrie Ann: “It was so good, I love when you do Quick Step, it was joy.”

Len: “I thought you had plenty of attack, easily your best dance so well done.”

Bruno: “You are the Ice Queen with a killer streak, your best dance so far.”

Carrie Ann: “You are proving yourself a worthy competitor.”

Len:  “Your ability to interpret music into movement is incredible, however I do have to drop a point for breaking the rules but I did really enjoy it.”

Bruno: “Spectacular and unforgettable, one of the best dances I have seen in fifteen seasons. You broke the rules, but I won’t forget this.”

Carrie-Ann: “That was by far the best dance we have ever seen, you broke the rules but it was pretty amazing.”