Who Got Voted Off Dancing With The Stars All-Stars Tonight 10/2/12? 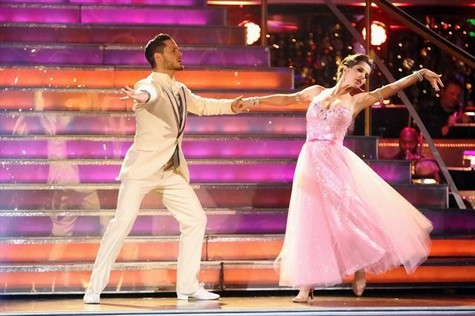 Tonight on ABC it’s the Dancing With The Stars All-Stars Season 15 second result show. On last week’s show our first casualty was Pamela Anderson. By the end of the evening tonight we will say goodbye to one more contestant. Who will it be? Did you see last night’s performance show? We did and we recapped it here for you. We also have all the videos of last night’s performances here!

We conducted a poll today last week to find out who YOU, our readers thought was going home and you voted Pamela Anderson by over 80% and you were right.  This week 72% of YOU think Bristol Palin is on her way out, followed by Kirstie Alley by 11.3 % of the votes.  So it looks like Bristol will be handing up her dancing shoes tonight.  There is still time to vote go to our poll HERE!

On tonight’s result show the musical guest featured will be Katherine Jenkins, last season’s finalist and classical singer, who returns to the ballroom as a special musical guest. She will be taking the stage with Placido Domingo, performing “Come What May,” featured on Domingo’s new album, “Songs,” out October 16th, as well as on Jenkins’ own new album, “This Is Christmas,” releasing October 30th. Their stunning duet will be accompanied by pro dancers Valentin Chmerkovskiy and Anna Trebunskaya.

Who are you rooting for tonight.  My favorites are Apolo who scored a 24.5/30 and Helios who scored a 23/30 last night.  I think they are safe but you never know!  Who are your favorites?  Who do you think will be eliminated on Dancing With The Stars All-Stars tonight?

We will be live blogging Dancing With The Stars tonight with all the up-to-the-minute details at 8PM EST so make sure to come back to this spot and watch the show with us. Refresh often to get the most up-to-date results!

Tonight’s episode: Last night twelve all stars heated up the stage as they competed for another shot at the mirror ball trophy.

Tonight we lose another favourite, but before that the judges are going to show us which past performances they believe were the “breakout dances” and the turning point for the all stars. Kelly Monaco danced the Samba with a wardrobe malfunction during season one in 2005 and Len Goodman thinks that is the performance that made her turn from contender to winner.

Drew Lachey, week`s six Tango back in season two had aggression, passion and good hold, he came out and just wowed Len who knew he was a showman and this time, he was fantastic. Len knows it must have been a blow last week to have been in the bottom two, he is hoping that the fans wake up and realize what a great dancer he is.

Emmitt Smith’s defining dance was week one when he did a Cha Cha to “Son Of A Preacher Man” according to Carrie Anne. He makes everything look effortless and Carrie Ann Inaba thinks he needs to bring his charisma and musicality to this season to win it.

Sabrina Bryan gave Len the greatest shock ever when she was voted out of the competition; her greatest performance according to Len was her Paso Doble that was action packed. Len is thrilled that after five years, the fans have brought her back and she is already giving strong performances.

Joey Fatone week three Tango, gave us the showman at his best as a Jedi Knight. It wasn’t technically his best dance, but in showmanship, it was awesome. . Bruno Tonioli thinks he has to keep the technique and not lose the showmanship if he is going to win it.

Len thinks Apolo Anton Ohno’s week five Samba to “I Like To Move It” with his great hips was the defining moment for Bruno. The intense athlete turned himself into an entertainer and got himself a perfect score of three 10’s.

Elio Castroneves has already won the Mirror Ball trophy and Len thinks his week eight Quick Step, it had everything, it had speed, it had control and joy all over it. Len thinks he can truly light up the ballroom and if he brings it to this season, everybody better watch out.

Bruno thinks Melissa Rycroft‘s Lindy Hop was sharp from beginning to end during season eight. She entered the competition with only two days to prepare and she didn’t take anything for granted, when she is faced with difficult choreography she delivers.

Carrie Ann thinks Gilles Marini‘s Argentine Tango in week 4 was as good as it gets. It was his perfect score of the season and it just got better and better.

Shawn Johnson showed she was a contender when she did the Cha Cha in week seven, according to Carrie Ann. Timing is everything and she blossomed at the right time, she just needs to bring the same thing this season.

Bristol Palin grew to become a contender in season eleven, her week six Tango was when she let her inner sexiness come out. Even though she sparkled in this moment, she really shined and needs to bring it again.

Bruno thinks Kirstie Alley‘s breakout performance was in week 4 when she danced the Waltz and her shoes fell off, she showed one of her strongest assets, her fluid arms. Kirstie is a true actor, if she can bring that commitment she will do great this season.

It’s time for the live show and to find out which all star will be heading home tonight. Before they start tonight’s show, the judges pick their favorite performance from last night to see again, Sabrina Bryan and professional dancer Louis van Amstel dancing the Quick Step.

Next up is the Macy’s Stars of Dance with a futuristic performance.

A performance from the Dance Troop reunites Benji and Lacey Schwimmer to the stage.

The couple that is definitely safe is, Kelly Monaco and and professional dancer Val Chmerkovskiy.

The final results are that in, for the second week the couple with the combined lowest score and leaving the competition tonight are Joey Fatone and professional dancer Kym Johnson, they have been eliminated.