Erin Heatherton Will Do Everything Possible To Keep Leonardo DiCaprio 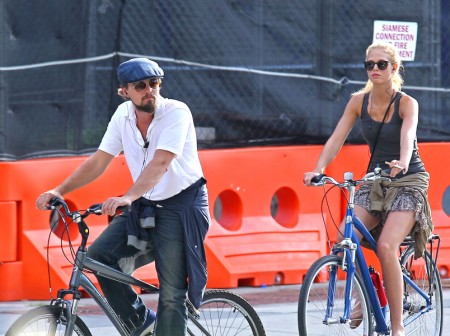 Leonardo DiCaprio has made dating and dumping beautiful women an art but current girlfriend, Erin Heatherton, is telling friends she’s determined to not just be another notch on the A-lister’s belt.

According to the New York Daily News, Erin is “head over heels” for the Titanic star and “doing everything possible not to mess up” the six-month-old relationship. And its working. Apparently this one isn’t as drama-loving as his past girlfriends and the couple “rarely argues” a source said.

Oh, I almost feel sorry for the 23-year-old gorgeous, tall, skinny and blond Victoria’s Secret model. And… I’m over it. Of course she’s infatuated with him. He’s Jack Dawson for christ’s sake! And he’s not yucky pretty anymore but somehow morphed into a distinguished dude, a la George Clooney. And like Gorgeous George, Leo doesn’t marry supermodels – he’s loves them and leaves them.

Why have one flavor for the rest of your life when every flavor to suit your mood lands in your mouth for free? I’m not condoning, just being realistic here. Now, there are many of you who’ve seen the recent pics of Leo and Erin all loved up and touchy-feely on bike rides and vacations. But he was like that with Blake Lively before she caught on to his act and left him for Ryan Reynolds. And he was like that with Bar Refaeli and Gisele Bundchen too. They weren’t as smart as Blake. It took them years to figure it out.

How do you stay with a guy who refuses to commit? Does Leo lie about it? Does he tell his women that they could be the one? I think Clooney is the opposite. Stacy Keibler knew what she was getting herself into and that an expiration date was involved. But Clooney dates older, more experienced women. Leo likes them young in their supermodel prime. So even if he does tell them that he’s not ready to settle down, they’re probably too naive and self-assured to believe him. They can change him!

Erin’s a pretty girl, probably nice and cool but I don’t see her being the one that gets Leo – if anyone does. Don’t you want to see him settle down with an Anne Hathaway or, gasp!, Kate Winslet? No offense to Erin, she can’t help the fact she’s beautiful, but it would be such a coup for the smart, interesting, curvy women in the world. But that’s if he ever gets down on one knee and I’m not holding my breath. You?