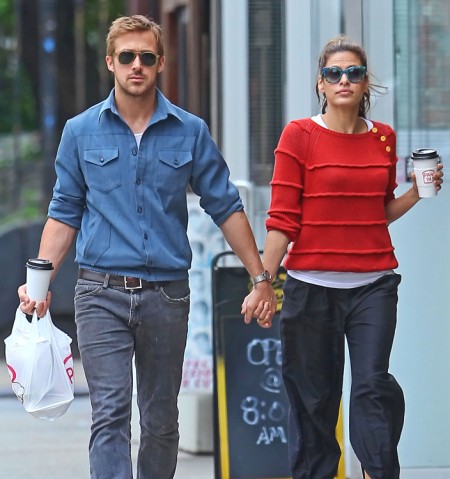 Thirty eight-year-old Eva Mendes is getting that maternal itch and hoping boyfriend, Ryan Gosling, can scratch it for her. The actress sat her boyfriend of 8 months down and told him he needs to start producing some results or Eva might start looking for some more fertile pastures. But Gosling, who is seven years younger, remains hesitant to wear the Dad pants even if that means losing Mendes for good.

It might be time for Ryan Gosling to put or shut up with girlfriend Eva Mendes, as the stunning actress is demanding a little Gosling from the Hollywood hunk.

“Eva has given Ryan an ultimatum. She told Ryan she wants a baby with him, and that if he isn’t prepared to do that, they should split up,” a source tells Star.

Eva, 38, has told multiple friends she is off the Pill and ready to become a mom. “Eva’s clock is ticking,” says the source. “She’s been aching to start a family for a few years – and even seriously looked into adoption in the summer of 2010. But now she and Ryan are together, and he’s mature beyond his years and great with kids.”

Eva believes that Ryan, 31, will be an amazing father and that the timing is right because they are in a committed relationship.

“He’s loyal and not a skirt-chaser,” the source says. But that doesn’t mean Ryan’s totally on board himself. “Ryan loves Eva, but he isn’t ready for a baby right now – he’s concentrating on his career,” the source explains. And that may just put an abrupt end to the adorable couple.

“Eva’s considering her options. If Ryan doesn’t change his mind, this could end up destroying their relationship.”

I’m not too sure if this is a new conversation for the couple. In March, we reported Ryan took a breather from Eva for “time to think“. Perhaps the conversation started then? This is such a difficult position because I can understand why Eva’s in the hurry. She’s at that age and has found someone she really loves but Ryan’s career is his main concern right now and I’m not sure if he’s willing to jeopardize that for a child. It was rumored he broke up with long-time love, Rachel McAdams because their careers were too busy and they were together much longer than he and Eva. Sigh. I have to find a way to bring up McAdams in every Gosling post!

Either way, they need to make a decision soon. Pressuring a guy to do ANYTHING is never the best option. But if Ryan doesn’t want a baby he needs to stop taking “time to think” and give the woman an answer. Time is not on her side. The sooner she knows where his head’s at, the sooner she can figure out how to get what she wants. What would you do if you were in their shoes?