Even Kristen Stewart’s Family Hates Her 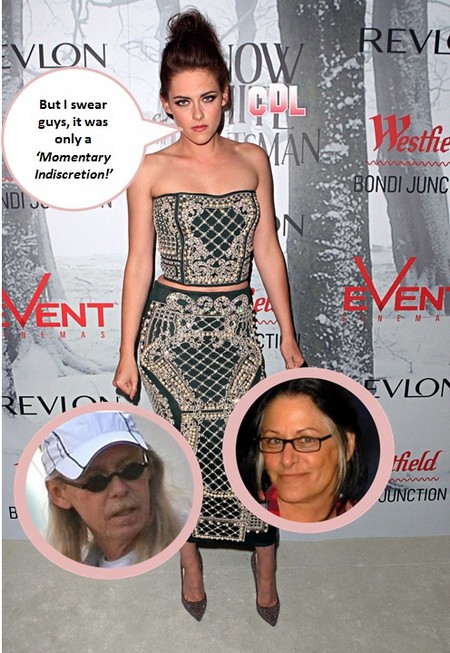 The whole world seems to be pinning the scarlet letter on Kristen Stewart’s cheating chest and she can’t even turn to her family for solace. She’s been hiding out at her parent’s house since Rob Pattinson forced her to move out of their Los Angeles home but things might be just as uncomfortable there.

Us Weekly reports Kristen’s parents, John Stewart and Jules Mann-Stewart, won’t be blotting the tears away from her eyes any time soon.

“[Her parents] feel Kristen has really embarrassed herself and don’t blame Rob for not calling her back,” a source tells the mag. “This is not the Kristen they know.”

Really? I find that hard to believe. Not many people are talking about it, but didn’t Kristen cheat on her long-term boyfriend and Speak co-star, Michael Angarano? The timing of when Kristen dumped Michael and started hooking up with Rob has always been a little mysterious. We know Kristen kept it going with Michael through the first Twilight but then something happened and they broke up and  then besties Nikki Reed and Kristen stopped being friends. People assumed Kristen stole Rob from Nikki, so there’s that. But also, Nikki was good friends with Michael since they co-starred in Lords of Dogtown together, so there’s that. Oh, this tangled web! I don’t know if Kristen cheated, I’m just saying there could be a pattern here. She’s a relationship jumper. You know the girls who won’t leave a relationship until they have a new one lined up because they don’t want to be alone? That could be Kristen.

So should her parents and the world have been that shocked when Kristen went behind Rob’s back? Better question – should Rob have been?