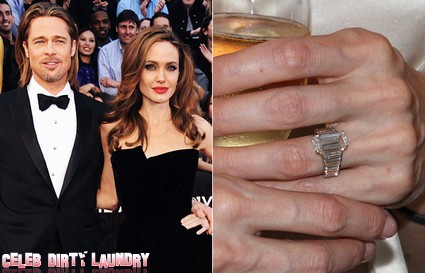 The hottest piece of jewelry on the planet right now is the Angelina Jolie engagement ring. Every woman wants one – well I’m sure Jennifer Aniston would pass given their history – but every other woman wants a rock just like Ang’s on their finger.

The platinum sparkler on the Oscar winner’s hand cost around $500,000. But when your fiance is Brad Pitt price kind of goes out the window. It features 16 carats  – the center stone has a whopping 7 carats. Brad designed it himself! In other words, this Mom of six is sporting some serious bling. And it’s not the kind of ring us mere mortals could afford – or is it?

Thanks to the copycats we too can have an Angelina ring and for a fraction of what Mr Jolie paid for the rock. A company called Gemvara is selling one. Their site described the knock off as …’Reminiscent of Angelina Jolie’s engagement ring, this piece possesses a coveted elegance‘ But while it may look like the real deal – it doesn’t have the price tag to match. It’s a mere $1200. Of course you don’t get the carat count of Ang’s for that but it won’t break the bank.

The hysteria surrounding the Jolie-Pitt engagement ring has been likened to Kate Middleton‘s ring. Prince William popped the question with his late mother Princess Diana‘s engagement ring. The gorgeous sapphire was a hit back in the early 80s when Di first wore it and became the must have ring again when Kate inherited it in 2010.