Is Angelina Jolie Pregnant – Why Did Brad Pitt Propose Now? 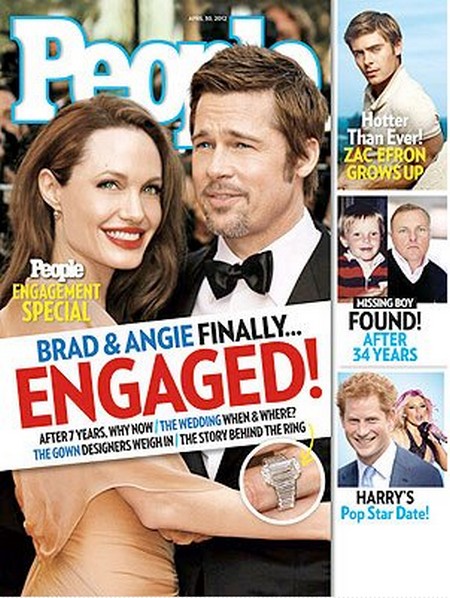 The cover story of latest edition of People is that Brad Pitt and Angelina Jolie are finally engaged!  And we were all delighted and surprised at the joyous announcement.  Now it is time to start speculating on where and when the wedding will take place – as well as all the details surrounding the big event.  Most intriguing is People’s promise to reveal why the Hollywood couple has chosen this particular time to become engaged… could Angelina be pregnant?

In the print edition we will learn all the exciting details about potential wedding venues as well as who will be on the guest list – and who won’t be!  Can we expect the woman Brad dumped for Angelina, yes Jennifer Aniston, to be asked to come?

People promises to tell us more about the story behind the engagement ring – We already know that Robert Procop — creator of “The Style of Jolie” collection — provided some info. “I can confirm that yes, Robert Procop did indeed design an engagement ring for Angelina Jolie, designed in collaboration with Brad Pitt.” The gown designers will be weighing in as well.  The only thing missing will be actual facts…

This week’s issue also promises to tell us everything about Zac Efron – apparently he is hotter than ever and all grown up!  I just can’t wait to look at the pictures.

People also has on their cover a story about a missing boy who was found 34 years after he was lost!  They don’t mention who the child was or the adult he has now become so we will have to read the print edition.

We will also learn about Prince Harry’s pop star date – always an exciting lad.  We bet he will be keeping a low profile for the next little while as Pistol Pippa’s scandalous weekend in Paris continues to make headlines.  Apparently Kate Middleton and Queen Elizabeth II are both disgusted with Pippa!

Are you excited about Brangelina’s engagement?  Let us know in the comments below.