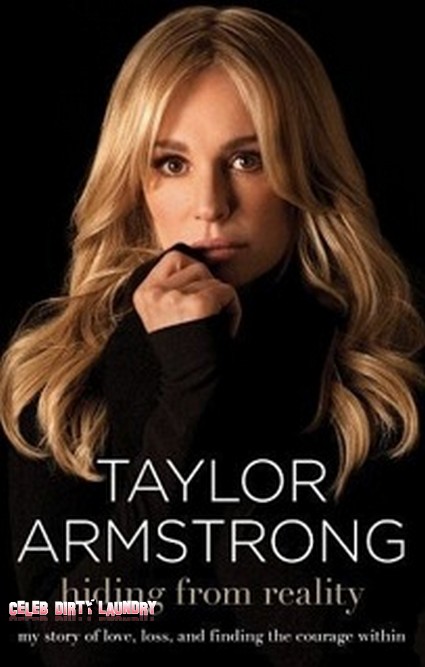 As we reported in December, Real Housewives of Beverly Hills star Taylor Armstrong is set to release her memoir “Hiding From Reality” on February 7th. The book, about her abusive relationship with her late husband Russell Armstrong, graphically details the violent and controlling behavior that Taylor has alluded to all season on RHOBH.

In excerpts released by publisher Simon & Schuster, Taylor writes that Russell was controlling and suspicious from the beginning, putting a tape recorder under her desk and reading her email. She claims that he was physically abusive early on, even when she was pregnant, but he got worse after their daughter Kennedy was born. According to the 40-year old blonde, Russell would physically and verbally abuse her in front of the 5 year old and even threatened to kill her when she fought back. She admits that he tended to hurt her in non visible areas: “He would grab my hair and bang my head against the side of the car between the two doors … it made his point to me but didn’t leave a visible mark.”

Following Taylors Vegas Trip with Lisa Vanderpump for Pandora’s bachelorette party—where we saw giving a very mundane lap dance to a Chippendales dancer— Russell accused the blonde of having an affair and hit her so hard that she had to seek emergency medical care. “The pain was excruciating. I could tell that something was very wrong with my vision,” Taylor writes, in another except. “This whole time Russell was glaring at me. ‘You’re so dramatic,’ he said. “You’re fine.’”

The injury was serious and resulted in a fracture of 40 percent of the bone that supports the eye. She required reconstructive surgery and there was a risk she would suffer a permanently sunken eye went to live with a friend.

Taylor has said that her memoir is intended as a warning to others who may be in a similar position. “I want readers in abusive relationships to learn from my suffering and use my book to help them find their own courage within.” It is currently available for pre-order.