Experts Say Miley Cyrus Could Be Suffering From Anorexia or Bulemia 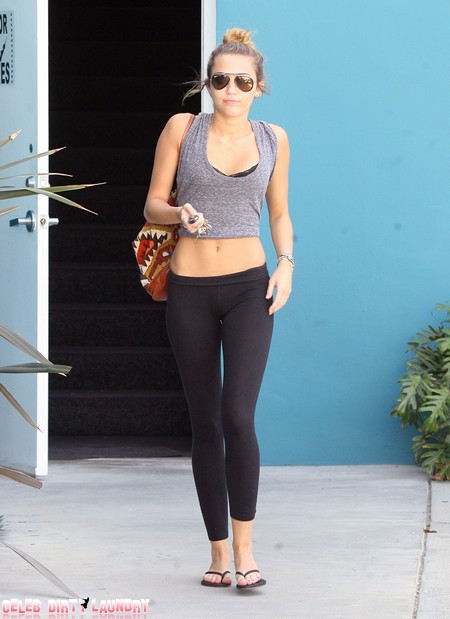 So now Miley Cyrus has an eating disorder! According to HollywoodLife, experts are worried she’s dropped 20 pounds and has too much weight on the brain.  No doubt that Miley does love attention – but after all she has been a superstar for much of her young life and so we expect some acting out.  The occasional Pantiless Crotch Flash, cutting herself in the kitchen, penis cakes… all in good fun.

This can all of course be gathered from recent tweets from the gym-loving star that are a bit health crazed and hunger-centric. Miley wrote, “I’ve got the sound of the rain & “we don’t eat” lulling me to sleep. My mind is wandering. So peaceful. #heavenonearth.” And in another, “Take a glorious bite out of the whole world.”

She’s 19! Why do we keep trying to decipher this chick’s cryptic tweets like she’s the Rosetta Stone? Let me assure you, she’s not that deep.  But am I judging too quickly? Am I disregarding Rosie O’Donnell’s message to Lindsay and choosing not to recognize the signs?

She has slimmed down. And her boytoy, Liam Hemsworth, is blowing up due to his career launching role in The Hunger Games.  Is Miley bingeing on pilates because she’s worried Liam’s throwing too much shade on her fame? And then, there are those alleged, pesky “cutting” pics. Any girl that can mutilate herself is capable of doing other kinds of damage.

But is this evidence enough? Because if the story isn’t a perfect fit I think we must acquit before WE give HER the complex. Let her go to the gym!  Let her experiment with her diet! Believe me, when too many bones pop out through her winter coat, I’ll be the first to call her out.  What do you think?  Is it premature to label the young star as an anorexic or a bulemic – or is it already too late?  Let us know in the comments below.