Eyewitness Report: Joe Giudice Cheated On Teresa Giudice While She Was Working! 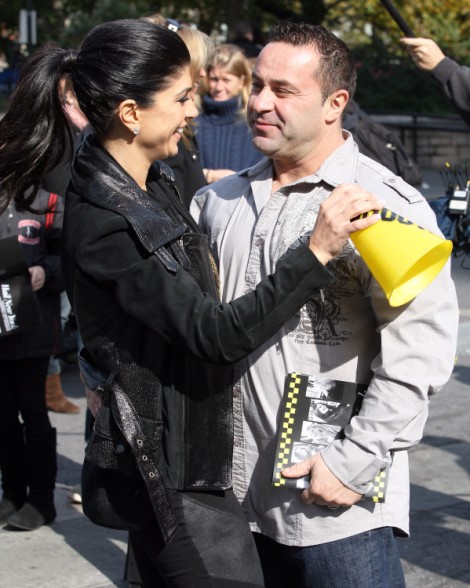 What better way to spend your wife’s money while she’s off making more of it? Go to Atlantic City… and pick up a hooker on the way. Well, no one knows for sure if she was a hooker but an eyewitness account says Joe Giudice cheated with someone while hitting it up in the AC a couple weeks ago. Naturally, Teresa Giudice was hustlin’ her brand as a celebrity guest at the Southern Women’s Show in North Carolina at the time. Can I just ask? Who’s with the kids?

Radar Online has the photos of Joe with the Teresa look-alike.

“I walked into Harrah’s bar around five in the morning and saw Joe Giudice conversing with a young girl,” Rosie Jones told Radar. “I know it wasn’t Teresa. She looked more like a working girl, although I can’t prove it. They walked out of the bar together to a more secluded area in the casino and played the slot machines for a bit. Joe’s friend came over and she sat on his lap and then Joe started rubbing her face and stroking her hair. Joe had his arm around the girl and as they walked off to grab a cab together I heard his friend say something like, ‘Life is great.'”

Life is great for Joe Giudice. He makes money off of acting like a dirt bag and his wife totally condones it. I’m telling you, something’s up! Either these two are playing us or Teresa is blind. I can’t shake the feeling that they’re a partnership and working it for the money and once they’ve shook all the money from the tree then Teresa will shake him off as well. Caroline Manzo had it right. There’s a book in there somewhere.

The pic doesn’t really do much for me but I don’t really need one to figure Joe is probably stepping out on Teresa. But she’s got to be careful. She’s got a spin off to deal with. If Joe gets sloppy it could put future deals in jeopardy. Or is the spin off using the cheating allegations as its story line? Damn those Giudices! I can’t put my finger on them! I have no idea what to believe!

Do you think Joe Giudice cheats? Is he just playing up the bad boy persona for the cameras or is he a loose cannon? I know they have kids but should Teresa just cut him loose? Why isn’t it Sunday! I can’t wait for Real Housewives of New Jersey Reunion Part 3! I want to see the Joes get into it!