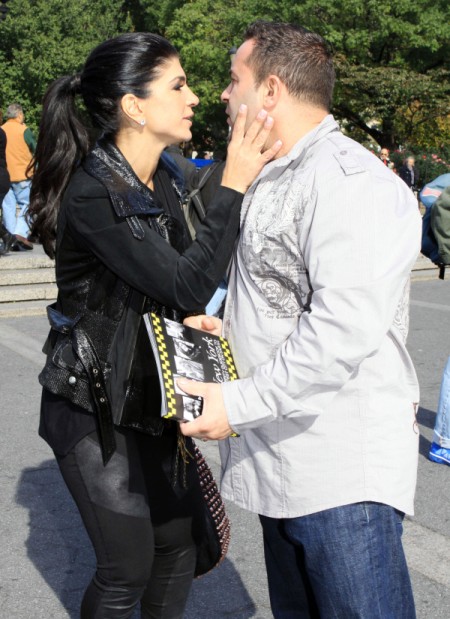 Rumors have plagued the reality couple for the past few seasons but in an upcoming episode it seems that Joe Giudice finally gets caught cheating on his wife, Teresa Giudice.

On the Aug. 19 episode of The Real Housewives of New Jersey, Joe hides from his wife during their Napa vacation and answers a phone call from a woman who says, “Hi baby.” When Teresa follows him to see who’s on the phone, Joe tells the other woman, “Here comes my b*tch wife… she’s such a c***.” He then tells Teresa he was talking to a co-worker that didn’t speak English. Do you call your co-workers baby? If it wasn’t for that line I might have believed him about the English-challenged co-worked. When I start learning a new language I always gravitate to the curse words first.

An insider who has seen the tape told the Huffington Post the shocking footage was caught because Joe forgot he had his mic on while he was giving the cameras the ‘ole sliperroo. Was he drunk? It’s no secret that Joe likes his vino and tends to get lippy when he overindulges. Apparently Teresa has known for a few days that this scene was going to air. How is she going to talk her way out of this one?

So it seems like Caroline Manzo’s callous comments were right all along. On a past episode she knocked the Giudice’s marriage and doubted it would be able to stand the test of fame that Teresa has clearly embraced. “Teresa wants it all, and I think that the demands she put on him led him to make decisions that weren’t the best. And I think he resents her for it, and he’s going to pay the ultimate price for it. Prediction: Something may happen where someone has to go somewhere. Teresa’s going to have to pull herself up on her bootstraps and take over. She’ll say, ‘You know what, I tried. I stood by him, but I have to divorce him now. And I’m gonna show my daughters what it’s like to be strong and independent on your own and survive.'”

Caroline can be crotchity but when she’s right, she’s right! But I feel for the Giudices. I love me some Joe. I love watching him Jean-Claude Van Damme his punching bag in the garage. I love that he brings a container of wine and cured meats to a charity race and I love when he tells his kids to shut up. It’s hilarious. Does anyone else notice that he prefers that little hellion Milania over the other kids? He lets that demon child get away with everything! I don’t care though. If the whole show was Milania and Joe sitting on the couch watching old re-runs of Bugs Bunny in their underwear I would be a content person.

Regardless, if Joe isn’t cheating, Teresa should still be p-ssed that he talked about her that way to somebody else on live TV. I’m sure she’ll try to play it off like the show was spying on him or somehow edited it that way but this all appears pretty clear cut. She’s also said and done things this season that have made it apparent that she’s been suspicious of him for awhile. There was that scene when Joe and Teresa were driving and he told her he left his wallet in someone else’s car and she kept pressing him about whose car it was. I remember thinking that was shady at the time.

But I’m never quite sure how much to believe with Teresa. She’s like Bethenny Frankel to me. She uses her family life (and drama) to create fans and ratings. I wouldn’t put it past Teresa to doctor a cheating story to increase her exposure. She’s creating an empire after all. She might seem as stupid as a box of rocks, and use the wrong words just about every time, but she’s savvy as all hell. It worked for Bethenny. Maybe Teresa thinks it will work for her. But that would imply that Joe is on board and along for the ride. That’s where I hesitate to believe this could all be fake. Joe is no team player AND a loose cannon. I’m not so sure he could follow a game plan surrounded by Napa’s finest wines, do you? However, in an atmosphere like that, I could imagine him forgetting his mic was on and taking a call from his girl on the side. AHH! I keep wavering! I have no idea what to believe and can’t wait to watch the show. Damn you Andy Cohen. Damn you!

Do you think Joe is really cheating on Teresa or is she planting the story to get attention? Also, can you believe I just wrote 800 words on RHONJ? Again, damn you Andy Cohen!