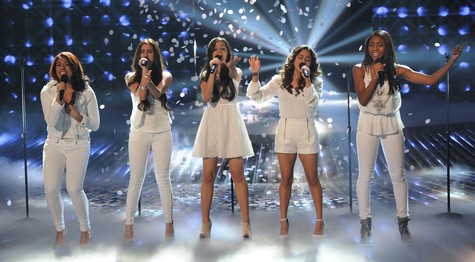 Fifth Harmony took the stage tonight on THE X FACTOR USA for their Final 4 video performance.  Fifth Harmony sang “Anything Can Happen” ” by Ellie Goulding for their song they chose to sing.  Tonight’s show the finale 4 performed live in front of coaches Simon Cowell, Britney Spears, Demi Lovato and AJ Reid for America’s vote and to make it another week.  Did you watch tonight’s performance show?  We did and we recapped it here for you.

Judges comments: LA thought the performance was the very best vocal performance that they have ever done.  He was very proud of them.  Britney loved everything about it, she thought it was magic.  Demi thought they pulled out the sparkle they really need.  Simon thinks they are the underdogs and to get into the finals  is going to take a miracle.  After that performance he thinks anything can happen.

The chose their song because they want to show LA Reid that they can harmonize.  If you want them to stick around for the Finale you have to vote for them.  Vote for Fifth Harmony at 1-855-THE-XF-04