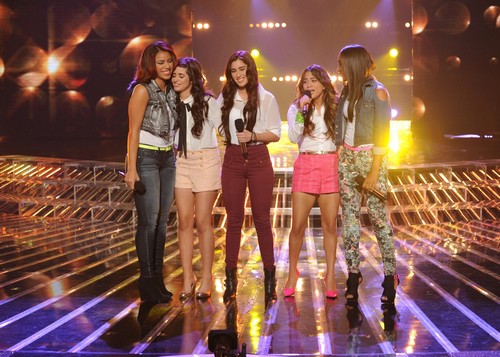 Fifth Harmony took the stage tonight on THE X FACTOR USA for their Top 6 video performance.  Fifth Harmony sang “Set Fire to the Rain” by Adele for their unplugged song.  Tonight’s show the top 6 performed live in front of coaches Simon Cowell, Britney Spears, Demi Lovato and AJ Reid for America’s vote and to make it another week.

Judges comments: LA points out the obvious, there was no harmony they all sang separately. Britney can’t figure out what makes them stand out and Demi thinks they don’t click as a group.

Simon’s second group still in the competition and Fifth Harmony is taking on Adele’s Set Fire to the Rain and I think they have demolished it completely. Vote for Fifth Harmony at 1-855-THE-XF-04