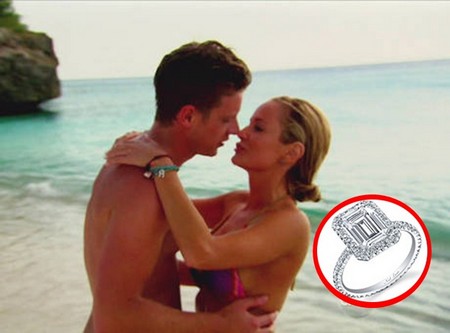 Emily Maynard says she found the perfect man in Jef Holm but it looks like she also got the perfect ring! Holm got down on his knee last night on the Bachelorette season finale and presented the 3.5-carat Neil Lane rock. According to People magazine, Emily’s engagement ring is handmade and features a 2.5-carat emerald-cut diamond accented with 87 smaller round-cut diamonds.

“I never in a million years thought I’d be so in love as I am,” Maynard said before the proposal. I can only imagine how she felt after she saw the sparkler!

Emily might have accepted Holm but a lot of viewers were suprised when she chose him over racecar driver Arie Luyendyk. But during the After the Final Rose special, host Chris Harrison explained why it was clear to him. “What really separated Arie and Jef in the end is how Jef made her feel. How she acted in the end, if you notice, she was a little girl around him. Jef brought out something unique in her. There was something special and unique about them. I don’t want to take anything away from Arie, who is a wonderful man and would have been a great husband. But she and Jef are so good together. I really think she chose wisely and I think she chose the right guy.”

How did you like the finale? Do you think Emily made the right choice? What do you make of the rumors that Emily’s friends are telling her not to marry Jef because he might be a fortune hunter? Emily is worth millions. Do you think she’d give back the ring?