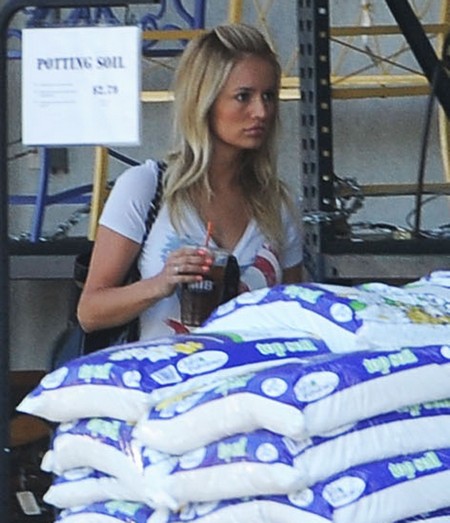 The Bachelorette Emily Maynard is too wealthy and ambitious to marry Jef Holm. Sources reveal that Emily is worth a whopping $5 million which makes her wealth greater than finalists Arie Luyendyk Jr.’s and Jef Holm’s combined! Are we implying that money matters more than love to Emily?  You bet we are! Insiders suspect that while Emily will accept Jef Holm’s proposal she won’t actually marry him.

There are a couple of solid reasons that Emily will not actually follow through with her engagement to Jef after she agrees to his proposal.  First of all, we already revealed on Celeb Dirty Laundry all the spoiler details of what happens with Jef Holms proposal to Emily Maynard.  In a nutshell, she says ‘yes.’  No surprise there – obviously the fix is in and Emily has no contractual choice but to agree to the proposal and become engaged.  It would be hilarious if Emily said ‘NO,’ but that would never happen.

But now it gets interesting.  The grandparents of Emily’s daughter Ricki, the Hendricks, are worth close to a billion dollars.  They already gave Emily a cool $2 million after their son, Ricky Hendrick (Ricki’s dad) died, leaving Emily pregnant. However the conservative Hendricks are freaked out that Emily has taken her search for love and a husband on national TV – as if she were some cheap tart for sale.  The Hendricks have threatened to cut Emily off from the gravy train if she embarrasses them further by actually marrying someone she meets as a result of her participation on silly reality TV show.  Emily sure doesn’t want to lose access to that money tree. What with Emily’s expensive plastic surgery obsession she needs all the dough she can get her hands on.

According to The National Enquirer Print Edition, July 30: “The reality is that Emily is already a millionaire five times over, and she certainly has more money than Jeff and Arie combined!”

“Emily’s already living in a million-dollar home,” revealed an insider. “She’s worth about $5 million now, and after the bachelorette the sky will be the limit as far as earning potential goes.

“But Emily is no dummy. She checked that the estimated worth of all the guys-and she could’ve bought and sold some of them.” Although the last man standing is fairly well off, you can bet that if Emily does walk down the aisle it will only be after signing a steel-trap prenup.”

But here is the kicker – the source goes on to suggest that “her engagement will eventually just fade away while she laughs all the way the bank!”  So we see that in the end, Emily’s entire Bachelorette experience is simply a way for an ambitious woman to boost her career.  Emily wants to be a TV star and what better way to get noticed for a top job than by ‘auditioning’ on The Bachelorette? Don’t hold your breath waiting for Emily Maynard and Jef Holm to get married – I say it won’t happen.  I’m betting Emily sets her sights on a super-rich tycoon or a top Hollywood star.  What do you think?  Do you buy Emily’s ‘good girl’ act?