Bachelorette Emily Maynard Is A Greedy Diva Behind The Scenes 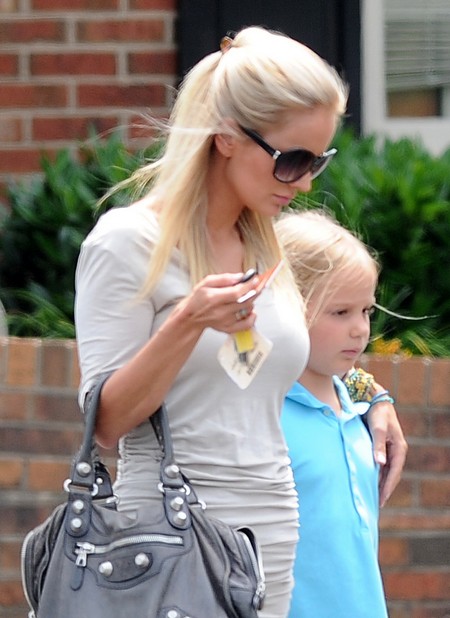 Bachelorette Emily Maynard tries her best to come across as a soft-spoken Southern Belle – a delicate flower waiting to be plucked and pampered by her prince charming. But the truth has been revealed and it does not paint a pretty picture of The Bachelorette star. When the cameras are off and Emily is not acting she reverts to behaving like the greedy screaming diva that she really is!

Emily has been called out by the family of her late husband, Ricky Hendrick, as a gold digger and we have previously exposed her extensive use of plastic surgery in her struggle to become a big celebrity.  But now sources have revealed that she is also a nasty piece of work – possessing a foul mouth and prone to temper tantrums when things don’t go her way.

Emily’s ultimate goal is to be big TV star and she views The Bachelorette as nothing more than a stepping stone to achieving her ends.  Emily is banking on getting the exposure she needs on the reality show so she can land a permanent gig in the future – preferably as a TV reporter or host. “She’s using The Bachelorette as a stepping stone to be a reporter or host,” a show source says – adds another source, “Emily wants to be famous.”

To this end the diva demands that she look perfect whenever she is on camera – and if she thinks she doesn’t her response is to scream and cry.  Us Weekly Print Edition, July 9th has details: If Maynard were dissatisfied with her onset hair and makeup, “she literally cried,” says the show source.  Wardrobe woes also led to meltdowns – “Emily would throw a fit if she didn’t like her outfit. She’d break out in tears when she was unhappy.” Continues the source, “she’s very conceited.”

When Emily is crossed she can curse with the best of them.  As Us Weekly reveals, When Maynard learned on the June 25 episode (RECAP HERE) that contestant Arie Luyendyk Jr., 30, once dated Bachelor producer Cassie Lambert, she lashed out at Lambert, fuming,  ‘What the f**k else is Arie hiding?’

And according to Us Weekly that was after Emily settled down! An insider said, “What you see on TV was after Emily calmed down. There was a lot of screaming. Hell hath no fury like Emily scorned.”

We also learn from US Weekly: “Money was important to Emily,” according to the insider, who claims that the Charlotte, North Carolina resident grilled producers about select men, including water bottle company CEO Jef Holm, to see if they own their own houses. “She wanted to know she could live comfortably.”

So there you have it folks – bachelorette Emily is described as a scheming spoiled diva with a nasty mouth!  Can this be true?  Is what we see on reality TV less than real?  Let us know what you think in the comments.  I think that Emily is all about Emily – and that she is as charming as an angry rattlesnake.  What about you?