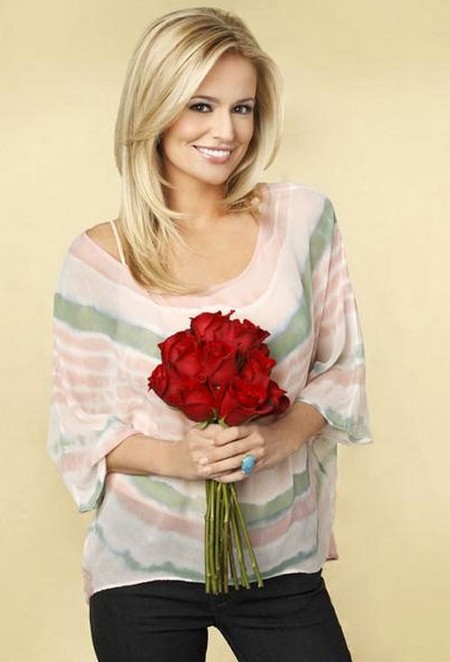 Tonight on ABC is an all new episode of  The Bachelorette 2012 – Emily Maynard. Tonight Emily visits her four remaining Bachelors’ home towns. If you missed last week’s show, we have a full and detailed recap here for you.

On last week’s episode Chris’ desperate attempt to get alone time with Emily worked and he got a rose on the group date. Meanwhile, Doug was sent home because Emily just felt that there was absolutely no chemistry between the two and it’s a good thing she didn’t string him along any further since he has a young son waiting for him at home.  At the Rose Ceremony, John was sent home as well, leaving Arie, Chris, Jef and Sean in the final four.

On tonight’s eighth episode of The Bachelorette – Emily Maynard, the Bachelorette first heads to Chicago, Illinois with Chris, then St. George, Utah, where Emily visits Jef and they have dinner at his ranch which is named “Holmstead”.

Arie’s hometown is in Scottsdale, Arizona and when Emily visits him, he takes her on a test drive in a two-seater go kart. Dallas, Texas is Sean’s hometown and he treats Emily to a family dinner.  If you want to read some of our fabulous spoilers for tonight’s show, you can click HERE.

RECAP: Emily spent some time with her daughter, she needed a break after Prague with her six men. It’s now on to the home town dates and Emily’s fist stop is Chicago to meet with Chris. The couple first take a walk around the city and then stop at a Polish restaurant to share a meal which is also a taste of his family’s heritage. The date goes well and Chris does apologize for his behaviour in Prague, but Chris’s family is left worrying that he will be getting his heart broken with Emily.

In St. George, Utah Emily visits Jef at his ranch and she is surprised to see a different side of him, she didn’t realize he was such a down to earth country boy. Emily is enjoying her time with Jef until she meets his siblings and finds them to be very critical.  Jef’s parents are not there, they are in South Carolina and could not be there. Emily confides in Jef’s siblings that she is falling in love with him and Jef comes out does probably one of the most romantic things in The Bachelorette history, he wrote her a letter and confesses that he loves her.

The next stop for Emily on the home town dates is Arizona to meet with Arie. The couple take a ride around the track at an Arizona racetrack and Emily couldn’t be happier. Arie’s family is Dutch and he is really worried that there will be a culture clash between his family and Emily. In the end, Arie’s family absolutely love Emily and he really feels that he is so smitten with her that he could actually propose to her in other circumstances.

It’s off to Dallas for Emily to meet her fourth and final guy, Sean. The couple start their date with a romantic picnic and he confides in her about a previously failed relationship and the reason why he won’t get serious again unless he plans to spend the rest of his life with the woman. Emily is in for a really big surprise when she meets Sean’s parents, he still lives at home or does he, because he then tells her he was just joking.

It’s back to Los Angeles and Emily is faced with having to decide with bachelor to send home. After a brief sit down with Chris, Emily has come to a decision and is ready to face her final four men.

Surprisingly Arie gets the first rose and he is completely thrilled. Jef gets the next rose and is no doubt happy that he can stop sweating. The last two men standing are Sean and Chris, one is going home heartbroken and one is getting a rose.

Next week, Emily heads out on her overnight dates with the final three men; Arie, Sean and Jef.