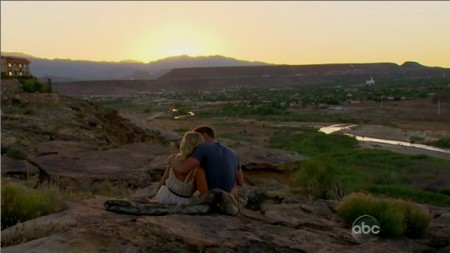 Things are just starting to get heated up and tonight Emily will be joining her final four on the home town dates. Did you see last week’s episode, if you missed it, you can read our full recap here.

Last week, Arie’s dirty little secret surfaced regarding his brief relationship with one of the producers, Cassie Lambert. Emily wasn’t happy that Arie wasn’t forthright with her, but she forgave him and he ended up getting a rose.

Chris was so desperate to see Emily that he left the hotel in search of her and got in a few smooches which got him a rose as well.  Doug was sent home during the group date because Emily felt they had no chemistry and John at the Rose Ceremony.  Emily’s final four last week heading to the home town dates were Arie, Chris, Sean and Jef.

Spoiler alert: If you’re one of those people who doesn’t like spoilers, stop reading NOW!  We have some juicy spoilers for you about the The Bachelorette episode 8 below!

On tonight’s episode, Emily heads to Chicago, Illinois with Chris where they visit the Wrigley Building. In St. George, Utah, Emily visits Jef and they have dinner at his ranch which is named “Holmstead”. Jef’s parents are mission presidents for the Mormon Church and don’t appear in the home town date because they live in Columbia, South Carolina. Arie’s hometown is in Scottsdale, Arizona and he takes Emily to his kart shop and then takes her on a test drive in a two-seater go kart. Dallas, Texas is Sean’s hometown and he treats Emily to a family dinner.

At the Rose Ceremony Chris will be sent home, which will bring Emily to her final three  Rumour has it that Arie will be the next one to leave, leaving Jef and Sean in the final two.

Don’t forget to come back tonight at 8 PM EST to get all the answers to your questions and for our awesome recap when will be live blogging The Bachelorette Emily Maynard episode 8. In the meantime, check out the preview video below.