First Pics Of Angelina Jolie On The Set Of Maleficent (Photos) 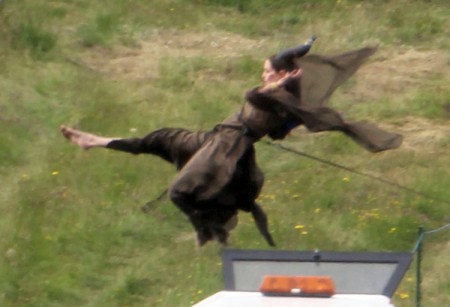 Angelina Jolie is taking her role as Maleficent to new heights as the actress was spied getting hoisted by a crane and suspended 15 feet up into the air for a scene earlier today in England.

Sporting her horns and drab, brown robe the actress had ear to ear smiles in between takes. The thrill-seeking star clearly feels at home while hanging from wires above the English countryside. She’s no stranger to doing her own stunts. She also took the bull by the horns (no pun intended) in Salt and Tomb Raider. Being a mom to six rug rats isn’t slowing her down one bit.

Can we take these pictures to assume Maleficent flies? Why else would they have her up there? Or did she ask the director to perch her up high so she could keep an eye on those royals. You know she’s obsessed with Kate Middleton!

The movie isn’t set to hit theaters until March 2014 but we understand it features the origins of Sleeping Beauty’s evil villain before she got Aurora to prick her finger on that misplaced spinning wheel. Elle Fanning plays the doomed princess. Miranda Richardson, Juno Temple, Imelda Staunton, and Sam Riley also star in the 3D flick. Does the premise remind you of Wicked? I hope it’s much better than that. It has to be. Jolie as Maleficent is just superb casting.

But that’s an awful long time to wait for a movie. Hopefully, we’ll get to kill some time by pouring over pics of Angelina’s wedding to Brad Pitt!