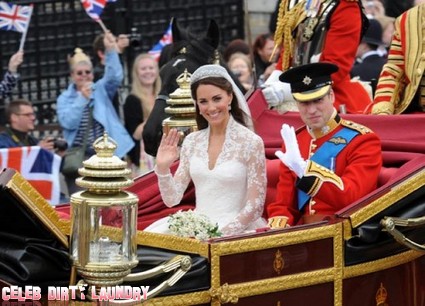 Prince William and Kate Middleton were the fairytale couple when they said ‘I Do‘ on April 29, 2011. It’s hard to believe almost a year has gone by since that magical day in London. This weekend the future King and his Duchess will celebrate their first wedding anniversary.

So how will they mark this big occasion? A trip to Paris? Skiing in Europe? A fancy party at a London nightspot? No. The down to earth pair will sneak off for a private getaway at Balmoral Castle. Ingrid Seward from Majesty magazine says ‘They are both big romantics and like to return to the places that mean a lot to them. I think William will have in mind a romantic night in one of the estate’s more isolated cottages – that is the way they seem to like to spend their special moments.’

Maybe some quiet time together will help produce the long awaited royal baby! The couple have been under pressure to deliver an heir since the day they married. Princess Diana was pregnant within Wills within a year of marrying Prince Charles. Many thought Kate would be expecting by now. She’s also older than Di – Kate turned 30 earlier this year.

It’s been a big year for the couple – Kate gave her first public speech, William fought in the Falklands and they had a very successful first overseas tour to Canada and the US. They deserve some private time. Congratulations to our favorite royals!