Kate Middleton And Prince William – The Wales In Wax (Photo) 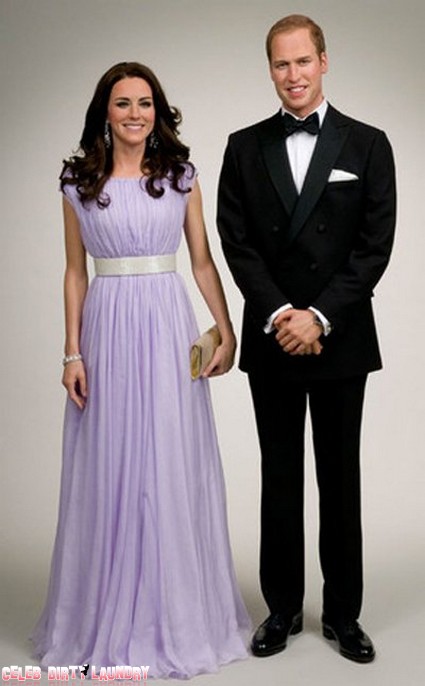 Kate Middleton and Prince William are a great looking couple in the flesh … or in wax. The Royal favorites have been recreated as waxworks to celebrate their first wedding anniversary later this month. And the result – as you can see – is amazing!

These waxworks will be unveiled at Madame Tussauds in New York today. They’re just one of four pairs of Kate ‘n’ Wills waxworks which will be displayed around the world. London, Blackpool in the UK and Amsterdam are also getting their very own royal couple and each waxwork will be wearing a different outfit.

The NYC version features Kate in a replica of the Alexander McQueen lilac gown she wore during her trip to LA last year.  She has a clutch and Jimmy Choo heels. You’ll also find a copy of that stunning diamond and sapphire engagement ring on her finger. She’s the best dressed, most stylish waxwork you’ll ever see. For the second in line to the throne it’s a double breasted suit. Nice to see the wax figure has thinning hair just like the real William.

The museum knows a bit about Royals in wax – it’s been making them for over 150 years “Madame Tussauds shares a close relationship with the British Royal Family dating back to William IV, who was King when the first attraction opened in London in 1835. The current Queen has been modeled by the attraction over 20 times and has given the studio team six personal sittings over the years’.

I just wonder how long until they have to add a Royal baby to the display?