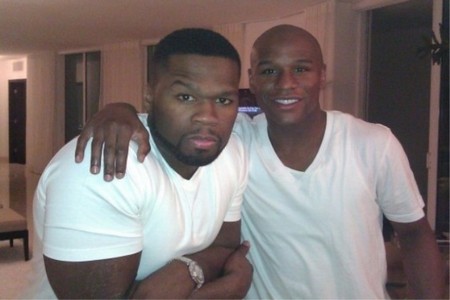 Let’s Take it to the Ring! Boxing ring I mean, for 50 Cent and Floyd Mayweather Jr.  We all know with all the tweeting and twatting that the two of them have been doing over the past month a group of investors came up with a brilliant idea, take it to the boxing ring.  Billionaire Alki David and his partner Damon Feldman who is with Celebrity Boxing have offered the both of them $5 million to settle their problems in public.

Ummm… I want that offer, just tell me who to hit.  Just kidding I’m barely 5 feet tall and almost 100lbs, a strong wind could kick butt.   See the both of them had a venture planned which probably contributed to the fallout.  They were supposed to do a boxing match together called, “The Money Team Productions.”  Now after Floyd was released from prison in August he said he was a changed person and did not want to go forth with the plan with 50.

November 1, 50 stated that he was done with “The Money Team Productions.”  50 wasted no time, this bobocito does not let grass grow under his feet, he in turn started a new promotional company with no other than Manny Pacquaio.  This was all verified with Pacuaio’s manager Michael Koncz.  Talk about rubbing salt in a wound, Pacquaio and Floyd are rivals.  Dog fight!

Let’s get back to the fight they were offered.  Mr. David plans that the show will air on FilmOn.com and BattleCam.com.  In order to make sure that the two of them don’t get too injured they will wear head gear along with big celebrity boxing gloves.  I say let them have at each other – 50 is from the streets and Mayweater is a professional boxer that seems like a fair fight to me.  The plan is to let them fight 3, 2 minute rounds.  The fight is scheduled for December 14, if they accept, and the location is Las Vegas, NV.  Guys don’t keep us waiting, let us know mijos so we can tape it!