BY Newsbylisa on November 6, 2012 | Comments: one comment
Related : Hot News 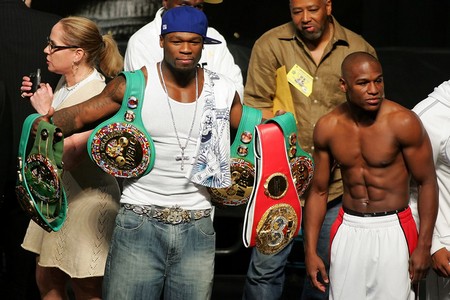 50 Cent & Floyd Mayweather! What can I say, the two have beef! Now they can sugar coated all they want to but I saw the Twitter between the two of them this weekend back and forth and it was nothing nice. Fifty is claiming it was all a hoax to get his friend some publicity, but I don’t think that anyone wants the publicity they generated.

It was all over the Twitter and on the radio stations in Philadelphia and they were not buying that it was just a joke either. This all relates back to the fact that Mr. Floyd was in jail for 60 days, and apparently according to Fifty wanted to be relevant again and in the spotlight. This tweeting back and forth has been going on for days I am just giving you the eye of the storm. This is what Fifty tweeted, “I’m sick of all this nonsense Floyd asked me to act like were fighting cause no one was paying any attention after his 60 days.” Now chicas this was on Monday, November 5. Then he goes on to say, “I know some the thing ( sic) we in hip hop for shock value are wrong. He just wanted some attention Floyd is like a brother to me.”

Oh brother!! It gets worse chicas, girdle your lions! Mayweather tweeted, “A male boxing groupie hold my belts because your album sales have declined.” He also tweeted, “Hold my money F***Boy” with a picture of Fifty holding stacks of cash while the boxer hovers over him.

This is all so totally unnecessary!  Here we have two public eye figures that the people can look up to and they’re dishing the dirty laundry, no pun intended, in public. Could they just not each talk and sort it out in private, why did they have to take it to the streets, very upsetting. What is more upsetting is that Fifty’s grandmother had to get involved