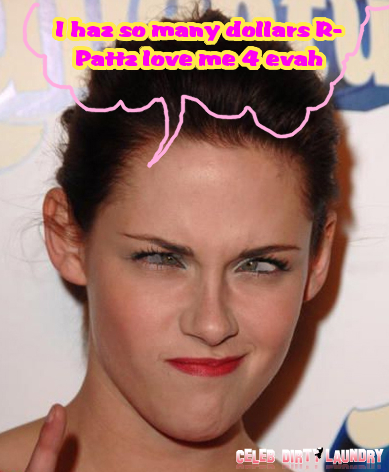 Forbes Magazine just released the best paid actress list and we’re not at all surprised to find out that Twilight star Kristen Stewart has taken home the prize. The ten women combined made a whopping $200 million the previous year. That is a blinding amount of money. We bet some of these stars take baths in their dollars.

In tenth place we have the romantically challenged Jennifer Aniston, who, according to recent rumours, is on a rocky road with BF Justin Theroux. In the 9th spot is the hysterical Kirstin Wigg, who achieved more fame than ever before with the release of her smash hit comedy, Bridesmaids. In 8th spot we have the Oscar darling, Meryl Streep. In 7th spot, we have the Sex and the City star, Sarah Jessica Parker. In 6th spot, we have a pretty woman, Julia Roberts. In 5th spot, we have the South African bombshell, Charlize Theron. In 4th spot, we have Brad Pitt’s fiancée, Angelina Jolie.

The top three actresses are not too surprising, as all three of them have achieved significant success in the past year.

In 3rd place, the scorned woman, we have Sandra Bullock. She’s more than Miss Congeniality, as we’d vote her Miss Popular and Miss Moneybags. In 2nd spot, we have the ever popular, Cameron Diaz, who is not only a Bad Teacher, but also a bad actress (don’t tell anyone we told you!).

And now, thanks to the imaginary drum roll you’re hearing in your head, we’re giving you the best paid actress of the past year. She has achieved so much in so little time and has been parodied for her stocky acting and mundane facial expressions. In first place, the only woman to look the same without an ounce of Botox, please congratulate her, Kristen Stewart! This Twilight actress amassed a fortune of $34 million in the past year with her horrid acting! Say thank you to Stephenie Meyer, Kristen!

What do you think, readers? Does Kristen deserve to be the highest paid actress of the past year?