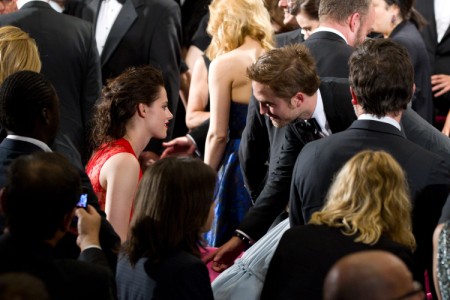 Kristen Stewart returned the favor today as she supported boyfriend, Robert Pattinson, at his Cosmopolis premier at the Cannes Film Festival. The actress pulled out all the stops in a figure hugging, red Reem Acra dress and walked the red carpet with her On the Road co-star, and Rob bestie, Tom Sturridge.

But it was what happened inside that’s got tongues wagging. Celebuzz reports Kristen was one of the first on her feet to offer a standing ovation to Rob’s performance. Rob has a lot on the line with this David Cronenberg – directed film. It’s a far departure from his Edward Cullen days. But by Kristen’s emotional response, he did not disappoint. In the intimate photo above, that was posted on the Robert Pattinson Life fan page, you can see Kristen lean over and give her boyfriend a “job well done” look.

“She looked on so proud,” a theatergoer told Celebuzz. “She let him have his moment with the cast before wrapping her arms around him and whispering something in his ear.”

Early reviews have been mixed for the controvercial film but Kristen only had eyes for Robert’s truly raw performance. She obviously knew how much this labor of love meant to him. In a recent interview he talked about the experience saying, “it’s the first time I really like one of the movies I make.”

I’m an old cynic, but I’ve got to say, these photos are adorable and truly cap off a fantastic Cannes tour for the young couple who have topped headlines with their post Twilight careers. For those of us who thought they’d have a hard time convincing the world they aren’t really Edward and Bella, we can rest assured these talents will be just fine.