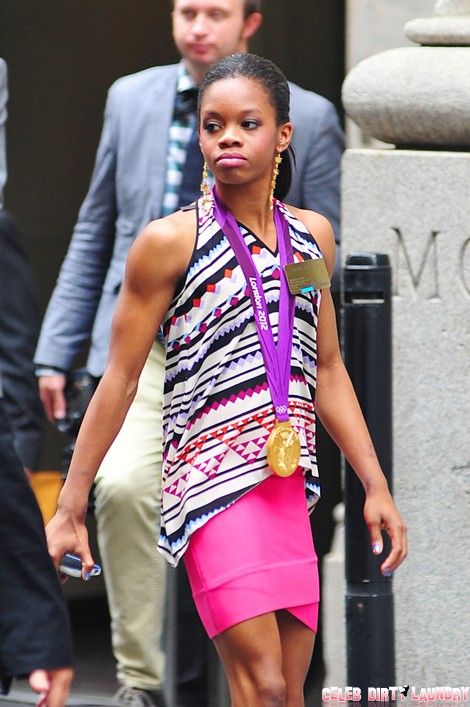 The London Olympic Games ended less than a week ago and already there are reports of MAJOR money grubbing between Gabby Douglas’ estranged parents, Timothy Douglas and Natalie Hawkins.  The young champion is looking at lucrative endorsement deals that are expected to bring in $10 million over the next few years and somewhere around $100 million over Gabby’s lifetime.  The National Enquirer is reporting that while the young star’s money should be put into a trust fund, the family is still looking for ways to cash in.

“Both sides of Gabby’s family are jockeying to be in good standing with the goose that laid the golden egg,” a close source said. “Meanwhile, poor Gabby is caught in the middle.”

Money isn’t the only issue that is dividing her parents.  Back in February Timothy was arrested for contributing to the delinquency of a minor and has a year to complete a state mandated program or else he’ll be carted off to jail.  Ironically, the incident occurred less than two weeks after Natalie had filed for divorce.  Since then things haven’t been good between the two.  Gabby has been outspoken about her father being a deadbeat and when the Olympics rolled around, he and his family didn’t receive tickets to the games, says the Enquirer,

“I’m trying to keep things positive right now,” Douglas, who served more than 17 years with the Virginia Air National Guard — including being deployed to Iraq and Afghanistan — told The Enquirer. “I feel like I’ve been the best father that I can be to my daughter and to my family.  “Gabby’s dad took relatives to London to see her compete, but she didn’t have tickets to get them into the events,” said the source. “They had to watch a lot of her competitions on TV monitors outside.  “Timothy and his family suspect Natalie had everything to do with them not being able to gain access to Gabby’s competitions and they’re furious about being cut out!”

It sounds like Gabby really is stuck in a tangled mess!  Do you think her parents are becoming greedy like so many others before them have?  Will her money really end up in a trust fund?  Tell us what you think in the comments below!

See Gabby, her mom and her dad’s mug shot.