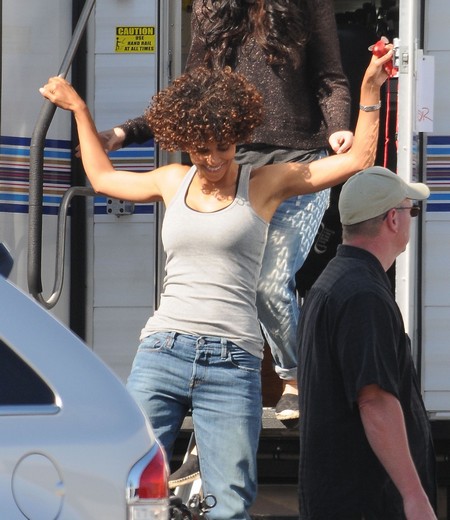 This Thanksgiving will certainly be one to be forgotten for Halle Berry and Olivier Martinez.  Early this morning, Halle’s ex and father of her four-year-old daughter Nahla, Gabriel Aubry, was arrested for attacking Halle’s fiancé Olivier.

Gabriel, a former model, reportedly attacked the French actor when he dropped the child back at Halle’s house after a sleepover with his daughter.  While Gabriel is said to be the instigator, both his and Olivier’s injuries were hospital-worthy – and Olivier has a busted hand while Gab has a broken rib.

As Hollywood Hiccups suggests there is more to this story than meets the eye. Right now Gabriel is in jail being booked for his assault on Olivier – sounds fishy. All the witnesses are Team Halle and the combatants spoke only French.  So who do you think is giving the cops the story? Olivier has the broken hand and Gabriel the broken rib – think about that for a minute. If you ask me, Olivier and Halle instigated the fight.  Those two snakes have everything to gain by making Gabriel look bad and are very bitter about losing their bid in court to steal Nahla.  Already Halle has obtained a restraining order against Gabriel which prevents him from seeing Nahla or getting within a 100 yards of her or Olivier.

Once again Halle is trying to use the law to marginalize Gabriel.  Hopefully his legal team will sort this out quickly.  Halle is a bully who uses her money to buy legal representation to do her dirty work.

Gabriel is a great father and Nahla loves him very much.  Olivier is an interloper who tried, with Halle, to steal Gabriel’s daughter away from him.

So what happened?  Ever since Halle and Gabriel split a few years ago, there’s been nothing but trouble plaguing the couple, with their custody battle over Nahla constantly in the headlines.

According to a TMZ source, “Gabriel went nuts” in front of Halle and several other witnesses. I wonder if it had anything to do with Halle’s recent failed bid to move Nahla to France with Olivier?  Although she was denied by a judge (which I might have to agree with – I’m not a fan of separating a child from their parent), it couldn’t have gone over well with Gabriel.  He petitioned the actress’s plans, even though Halle argued that being in France would keep Nahla more safe from the prying lenses of the paparazzi (privacy laws are stronger in France – why the heck doesn’t everyone move there?).

Nonetheless, violence isn’t the answer, especially if your 4-year-old is a witness to it.  Halle, for her part, hinted to InStyle magazine earlier this month that with relation to her ex, “there is turbulence, but this too shall pass”.  Not likely any time soon I’m afraid.  After being attacked, Olivier is determined to press charges, which certainly doesn’t bode well for Gabriel’s plight to share custody of his daughter.  For the sake of Nahla, I hope they can make it work!

Are you Team Gabriel or Team Halle and Olivier?