BY Scuttlebooty on May 9, 2012 | Comments: Leave Comments
Related : Celebrities, Game of Thrones 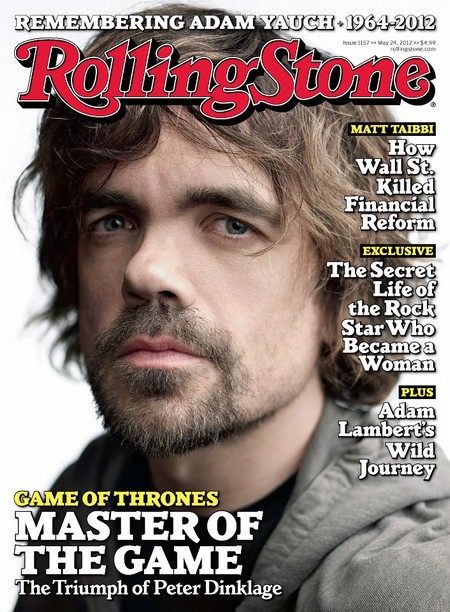 Peter Dinklage is on the May cover of Rolling Stone looking like he owns the place. And right now he does. Dinklage is tearing it up as Tyrion Lannister in HBO’s massively successful Game of Thrones, a role that was adapted from George R. R. Martin’s best-sellers with only him in mind.

He sits down with Rolling Stone writer, Chris Norris, and discusses how it feels being a little person with giant-sized fame. The pickins weren’t always so choice for the 41-year-old actor. Dinklage admits he had to make a choice early in his acting career about whether he would allow himself to be type-casted into playing another pointy-toed elf or goblin-like character to pay the bills. “I said, ‘No.’ It was hard. I was wondering, ‘How am I going to pay the rent?’ You need the work, that’s how you make your living. But I’m going to play roles that are appropriate to my size – it’s all about how real it is.”

Dinklage caught Hollywood’s notice when he starred in 2003’s The Station Agent and ever since has worked regularly without compromising his customary high standards. And, along the way, he developed an attractive swagger that kept people’s attention for all the right reasons.

His presence is so commanding both on screen and off, Norris describes his character, Tyrion Lannister, as “a figure of such complexity, charisma and mold-breaking sexuality he may fill a Tony Soprano-size void with a third the body mass.”

Even Lena Headey, who plays Tyrion’s conniving sister Cersei, isn’t immune to his charms. “You think, ‘Oh, there’s Pete, and he’s that size,’ then you go… ‘and he’s superattractive’. He totally knows he’s got it.”

Dinklage does have it. I love Game of Thrones and have read all the books in the series so far and Tyrion Lannister is by far the main reason to tune in. I can’t imagine anyone else playing the character much like I can’t imagine anyone else playing Tony Soprano or Michael Corleone. These are once in a career characters that require supreme talent and we’re lucky that Dinklage stayed true to his beliefs and didn’t get burnt out in Hollywood playing “Elf number 4”.

Hopefully the series sticks around long enough to tell the full tale of Westeros. Martin has written five but the notoriously slow writer says he has two more to go to finish the series. I hope anti-hero Tyrion sticks around for the ride but you never know with Martin. As he mercilessly writes, “When you play the game of thrones, you win or you die.”

Do you watch Game of Thrones? Do you agree with Rolling Stone’s decision to put Dinklage and his cool mug on the cover?