BY Annemarie LeBlanc on May 6, 2012 | Comments: 3 comments
Related : Game of Thrones, Recap, Television 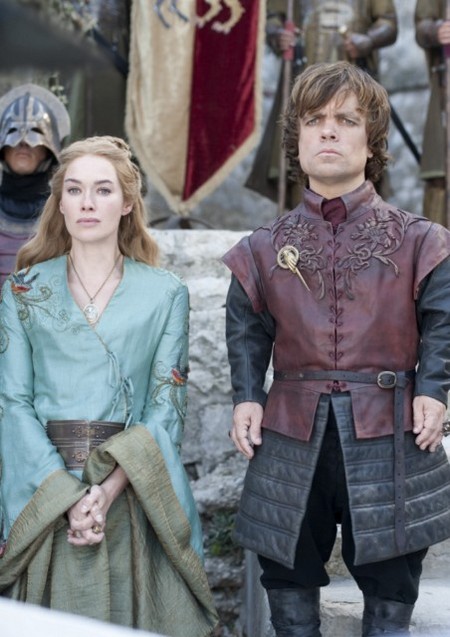 HBO’s hit show Game of Thrones returns tonight with the sixth episode of the second season called ‘The Old Gods and the New.’  This episode’s title comes from last week’s episode when Catelyn Stark and Brienne of Tarth swear oaths in the name of the Old Gods and the New.  Stand by as we live blog tonight’s episode with the up-to-the-minute details.

On last week’s episode Tyrion found out about Joffrey’s master defensive plans as well as about some secret weapon that could be used to defend the city against attack. Theon started his quest to prove to his father that he is Ironborn and not a Stark lackey. In Harrenhal, Arya found help from a surprising source.

While north of the Wall, the Night’s Watch made a stand against the wildlings at an ancient fortress.  If you missed the episode you can read our full and detailed recap here.

On tonight’s show Theon completes his master stroke. In King’s Landing, the Lannisters send Myrcella from harm’s way in the nick of time.  Arya comes face to face with a surprise visitor; Dany vows to take what is hers; Robb and Catelyn receive crucial news; Qhorin gives Jon a chance to prove himself. Joffrey meets his subjects.

Tonight’s recap: Tonight’s show opens with someone sending a message.  Theon has taken Bran’s castle, Winterfell.  Bran asks why since he believes Theon works with Robb Stark.  Theon tells him he is a Greyjoy and he fights for them.  Theon tells Bran he will yeild and tell the people that Winterfell is his.

Theon’s men capture Sir Roderick and he tells Theon he has no morals.  He tells Theon that Lord Stark raised him as his son.  Theon tells Sir Roderick that the 17 kingdoms are at war and he is the new Lord of Winterfell.

Sir Roderick taunts Theon and calls him a coward he tells him to kill him with his sword and not make someone else do it.  Bran screams for Theon to stop.  Theon asks if he has any last words and he says ‘God help you now you are truly lost.’  Theon kills him.

Jon Snow and the Rangers are looking for The Wildings.  Qhorin Halfhand tells Jon Snow they are at war.  The Watch has give Jon a great gift and he has only one thing to give back, his gift.

Qhorin tells him when he saves people and he dies no one will know who he is.

Lord Tywin is speaking to his men and he asks Arya to get a book for him and quizzes his men on who rules an area, they do not know.  It is announced that Lord Petyr is there.  Tywin ask Arya to clear the room.  Petyr has travelled from Renly’s camp.  Petyr tells Tywin that this might be an opportunity for him.    Petry wants to represent Tyrell’s interest.  On his son Therion he met with Catlyn Stark, he tells Lord Tywin Catelyn Stark had a proposal concerning her daughters.

Qhorin and Jon Snow attack some wildings and captures one.  When Jon takes her hood off her jacket is a girl, Ygritte.  Jon thinks they can question her but Qhorin tells him that it would be of no use. Ygritte tells Jon they should burn those that they killed.  Qhorin asks if Ygritte has friends in the area. He asks what is beyond and Ygritte tells him free folks hundreds of thousands.  Qhorin as if they mean to march on the wall. He asks if her people would capture him. Ygrittetells Qhorin they would take his head off if they were being nice that day.

Qhorin goes to kill her and Jon Snow tells him he will do it.  Qhorin leaves with the other Rangers and tells Jon Snow to come back soon because her people around. Ygritte taunts Jon that he has never killed long before. Ygritte asks him to burn her after and he says no because someone will see the smoke. She tells him to strike hard and strong or she will come back and haunt him.

Ygritte tells him to be quick about it. He raised his sword and slams on Iraq and does not kill her. She attacks him pushes him and runs away.  Jon follows her and captures her again.  Ygritte taunts him that he cannot do it and he knows it, they both know it. She tells him the sun is going down and the loss friends.

Cersei’s daughter Myrcella is being taken away for her own safety.  Cersei is totally pissed at Tyrion.  Joffrey walks among his people.  Tyrion gets worried because he is afraid something is going to happen and he tells them to take the little prince away. Someone throws a cow pie at Joffrey’s face and he starts to go insane. He’s screaming for his guards to kill everyone. His personal bodyguard Sandor takes him and tries to get him to safety. The people are rioting and they are tearing people apart.  Tyrion starts to look for Sansa as Sandor tries to get Joffrey to safety.

The guards get Joffrey and Cesei to safety. Joffrey is raving.  Tyrion tells him he ordered people killed because he got a Cal Pinus face. Joffrey screams that he is the King.  Tyrion slaps him in the face and says now I have hit a king. Sansa is trapped outside and several men have her and they’re trying to rape her . Tyrion tries to find someone to help them save Sansa.  Just as the situation was getting dire, Sandor jumps to her rescue and brings her back in the castle.

Daenery is with Xaro and she is impatient because the Spice King is keeping her waiting.  The Spice King,  apologizes for being late, he had terrible dreams last night.

The Spice King does not doubt her honesty. But first she has to take the iron throne, he asked her she has an army were she has any allies. She has to admit she does not but she feels the people will rise to support her.

Daenery tells him she is no partner woman her dreams come true.  She is the mother of dragons.  She tells The Spice King she will take but is hers. The spice King tells her not with his ships.  He says to her “Unlike you I do not have exalted ancestors, I make my living by trade and I judge every trade on its merits.”

Arya sees a document on Tywin’s desk and Tywin comes behind her and asks who taught her to read. She admits that with her father.  Tywin recounts how he taught Jamie to read.

Tywin asked who her father was and him he is alive.  Arya tells him her father was a stonemason and he taught himself agreed.  Arya asks Lord Tywin if he knew his father. He tells her he did he grew up with many watched him grow old, he love them.  Tywin tells him he was a good man but a weak man.

Arya still the letter that was on Lord Tywin’s desk.  As she reads it to run sent to a soldier. He takes a note and asked her where she got.  she lies and says Lord Tywin gave it to her to take to the armory.  He he tells Arya he is going to take her to Lord Tywin that she took the letter.

Arya runs to runs to Jaquen H’gen and asks him to kill the soldier.  He kills him.

Robb Stark gets back to camp and Lady Talisa is there. She asks him if they’re going to be there long and he asked her if she is by. Robb hears a voice behind him and at his mother Catelyn Stark and Brienne.  Robb introduces his mother to Lady Talisa.

Robb tells his mother he missed her she says yes you look positively forlorn. His mother wishes that he could follow with heart, he is promised someone and he must keep his word.  They get news that they have news from winter fell.

Jon Snow is with Ygritte and it seems the rest of the Rangers have left him.  Ygritte tells them they have to find shelter rather going to freeze. She tells him they will stay warm if they stay close.  Ygritte tells him he will freeze before she does. Jon has are all tied up, he lies down on the ground next to her. She askes if he thinks they’re looking for him and he said yes, she asked if he thinks they will find them and he replied yes. She tells him he is brave but stupid.  Jon tells Ygritte they will leave at first light.  Meanwhile she keeps moving around and trying to seduce him.

Robb and his Mom are told that Theon has taken Winterfell.  They tell him that Sir Roderick is dead.  Catelyn tells Robb she knew they shouldn’t have trusted a Greyjoy.  Robb wants to go to Winterfell – he tells them if he cannot save his own castle what can he save.

Shae is cleaning the cut on Sansa’s head.  Sansa does not understand why the man tried to hurt her.  Sansa tells Shae she hates the King more than anyone.  Shae tells her she never knows who is listening and she should not trust anyone it’s safer that way.

Theon is asleep and Osha sneaks out of his bed.  A soldier catches her and she tells him she’s to make the rounds to keep all the soldiers form. She stabs him. She helps frees the Stark family, Hodor carries Bran to his safety.

Daenery is talking to Xaro and she is upset because The Spice King has told her if she sleeps with him she will give own what she wants. They walk into the room and her people are slaughtered, all her Khalasar have been murdered.  She runs upstairs and her dragons are gone!  They have been kidnapped, she starts to scream where my dragons?

In the last scene we someone climbing stairs with a box on his back and we can hear that the dragons screaming in the box.  We don’t know who the person is. But we do know he has Daenery’s dragons. Yikes!