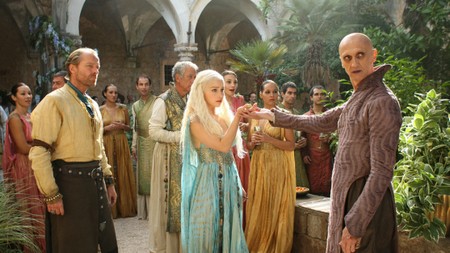 HBO’s hit show Game of Thrones returns tonight with the forth episode of the second season called ‘The Ghost of Harrenhal.’   This episode’s title has no particular meaning – except that in one of the novels – a series of unexplained events at Harrenhal are attributed to a ghost. Stand by as we live blog tonight’s episode with the up-to-the-minute details.

On last week’s episode Joffrey punished Sansa for Robb’s victories, while Tyrion and Bronn scrambled to temper the king’s cruelty. Catelyn entreats Stannis and Renly to forego their ambitions and unite against the Lannisters. Dany and her exhausted khalasar arrive at the gates of Qarth, a prosperous city with strong walls and rulers who greet her outside them.

Tyrion coerced a queen’s man into being his eyes and ears. Arya and Gendry are taken to Harrenhal, where their lives rest in the hands of “The Mountain,” Gregor Clegane. Davos reverted to his old ways and smuggled Melisandre into a secret cove.  In the cove Melisandre gave birth to something – a black oily creature or demon.  If you missed the episode you can read our full and detailed recap here.

On tonight’s episode Cat has to flee and Littlefinger acts quickly after the Baratheon brothers’ enmity comes to an end. At the capital, Tyrion finds out about Joffrey’s defensive plans as well as about some secret weapon that could be used to defend the city against attack. Theon starts his quest to prove to his father that he is Ironborn and not a Stark lackey. In Harrenhal, Arya finds help from a surprising source while north of the Wall, the Night’s Watch make a stand against the wildlings at an ancient fortress, the Fist of the First Men.  Arya receives a promise from the enigmatic Jaqen H’ghar.

Tonight’s episode: Tonight’s episode opens with Catelyn talking to Renly – she tells him her son has no interest in the Iron Throne. Renly tells Catelyn her son can still call himself the King of the North. He needs to swear his fealty to Renly.  In return for Robb Starks loyalty he will destroy his Stannis’ army.  Catelyn begs him to negotiate peace with his brother Stannis.  Renly asks her to bring his terms to his son. The wind blows it in comes a black shadowed creature that Melisandre had and stabs Renly as Brienne and Catelyn watch. The soldiers come in and they think Catelyn killed Renly.  Brienne jumps to her defense and kills the soldiers.

Brienne falls to the ground sobbing on Renly.  Catelyn tells her they have to leave she will hang for what she has done.  Brienne tells Catelyn she will not leave. She tells her she cannot avenge Renly if she is dead.

Tyrion goes to speak to his spy to find out what Joffrey plans. He tells him that the King has thousands of jars filled with Wildfire that they intend to launch into Stannis’ boats.

Davos tells Stannis that he is sorry for the death of his brother Renly.  Davos wants to speak to him about what he saw in the cave with Melisandre.  He is displeased about what he saw in the caves.  Stannis does not want to hear.  Davos tells Renly nothing is worth what this is going to cost him.  Stannis tells Davos when they sail to Kings Landing if they take Melisandre the victory will be hers and not Stannis’.

Stannis decides to set out to Kings Landing without Melisandre.

Tyrion talks to Bronn and tells him that Stannis has more ships and more soldiers than they do.  Tyrion does not believe they can hold the city the way Joffrey plans to protect it.

Theon goes to the crew of the Sea Witch and tells them he is their commander.  They are heading to the Stony Shore to raid villages.  Theon wants to prove he’s worthy to be called Ironborn.  Margaery his sister comes to see him off and she mocks him because the crew is not listening to him.

Theon’s first mate tells him that they’re not going to respect him until he proves himself.

Arya is at Harrenhal and she hears the Tywin Lannisters talking about the Starks.  Tywin asks Arya what they say about Robb Stark in the North. She tells him they call him the Wolf and they say he cannot be killed, but she doesn’t believe that – she knows anyone can be killed.

Jaquen comes up to Arya and says, ” the boy is a girl , I always knew you were a girl.”  He tells Arya that she saved him and his cage companions, she” stole three lives from the red God,” and they” have to give them back.” Arya clarifies,” I can name anyone, and you’ll kill him?”  She asks him to kill the man who tortures everyone.

The Nightwatch arrive at the Fist of the First men, an ancient fortress where they hope to stem the advance of the Wilding Army.

Tyrion goes to see what Wildfire is (Joffrey’s secret weapon)  Joffrey intends to fill his jars with wildfire which is an accelerant and capulet it at Stannis’ boats.  Bromm tells Tyrion it will never work because the people who can fling those things at the boats are out fighting and the men that are left are not experienced.

Bromm is not convinced he tells the man, “men win wars not magic tricks.”  Tyrion asks to see the jars they have, they have over 7000 jars.  Tyrion tells the man he won’t be making Wildfire for his sister anymore he will be making it for him.

Over at Quarth Daenerys is playing with her dragon.  The richest man in Quarth sent her a beautiful dress.  Her maid suggest she should wear the dress since she is a guest.

Her people want to steal from the people of Quarth but Daenerys tells him no way. Her host saved them from the Red Waste and they will not steal from their host.  Pyat Pree offers her an invitation to the House of the undying.

One of the citizens of Quarth comes over to Jeaor and says ‘you watch over her.’  He asked how she knows him and she tells him he needs to watch her.

Brienne and Catlyn are traveling. She tells Brienne there will be one more day until she gets to her son Robb Stark.  Bienne asks if once she is safely back with her people – will she give her leave to go.  Catlyn tells Brienne Renly’s death is not her fault and she serves nothing by following him to his death.

Brienne tells Catlyn she will serve her because she has courage, not battle courage but a woman courage.  Brienne makes Catlyn promise she will not hold her back from Stannis.  Brienne pledges her allegiance and promises to give her life for Catlyn if it is necessary.  Catlyn promises that Brienne will always have a place in her home and her table and will never ask her for anything that would dishonor her.

Bran stark recounts his dreams and how he saw the castle full of water.  He saw the three eyed raven in his dream.  He asks what it means?

The Quarth asks Daenerys how long her man servant has been in love with her. She tells him him Jeor is her advisor and not in love with her. He asks Daenerys what she wants. She wants the Iron Throne, it is hers.  The Quarthian who let her in the doors of Quarth tells Daenerys he wants to marry her. He tells her if she marries him he will give her the 7 kingdoms.  Her children will be Prince and Princess is. The time is right Robert is dead.

Daenerys tells Jeor the time to strike is now.  Jeor tells Daenerys, “rich men will give you ships but then they will own you.”  Jeor tells her patience will get them what they want.  Jeor tells her he only wants to see her on the Iron Throne.  She has a gentle heart, she would not be feared, she would be loved.

There are times when Jeor looks at her and cannot believe she is real.  Daenerys asked him when he would have her do. He responds make her own way, the allies they need are in Westross.  She asks how she will get the ship, he tells her he will find one for her. A sound ship with a good captain, she responds “I look forward to meeting him.”

Arya is watching Gendry practicing with the sword. She tells him if he is practicing for a fight he should practice right.  Arya and Gendry hear a noise and they runs over and they see the man who was torturing the prisoners is dead. She realizes Jaqen kept his word and killed him for her.   She looks up and Jaqen is there in the window.

She has two more people he will kill for her.  I wonder who she will choose!