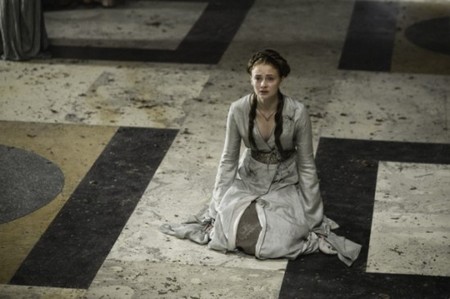 HBO’s hit show Game of Thrones returns tonight with the forth episode of the second season called ‘Garden of Bones.’   The title comes from a segment of tonight’s episode when Danys and her Khalasar arrive at the gates of Qarth – Ser Jorah tells Danys that every time the  Qarthien’s closes their gates to travelers ‘the garden of bones grows.’  Stand by as we live blog tonight’s episode with the up-to-the-minute details.

On last week’s episode Tyrion devised a brilliant way to find out who is loyal to his sister -he plots three alliances through the promise of marriage. Catelyn arrived in the Stormlands to forge an alliance of – but King Renly, his new wife Margaery and her brother Loras Tyrell had other plans.  Arya’s journey north is interrupted once again by Joffrey’s soldiers, but this encounter proves far more damaging than the previous one.

The soldier catch her and round up the children and tell them they are looking for a bastard called Gendry.   Arya tells the guards they already found Gendry and points to a dead boy on the ground.  Of course it is not Gendry but they believe her because Gendry’s helmet is on the ground next to the dead boy!  It was a great episode and if you missed it you can read our full and detailed recap here.

On tonight’s episode Joffrey punishes Sansa for Robb’s victories, while Tyrion and Bronn scramble to temper the king’s cruelty. Catelyn entreats Stannis and Renly to forego their ambitions and unite against the Lannisters. Dany and her exhausted khalasar arrive at the gates of Qarth, a prosperous city with strong walls and rulers who greet her outside them.

Tyrion coerces a queen’s man into being his eyes and ears. Arya and Gendry are taken to Harrenhal, where their lives rest in the hands of “The Mountain,” Gregor Clegane. Davos must revert to his old ways and smuggle Melisandre into a secret cove.

Tonight’s recap: Tonight Show opens with Joffrey’s soldier camped and they are attacked by Robb Stark.  Robb Stark wins the fight and they have many prisoners.  Robb Stark refuses to torture the prisoners because he doesn’t want to give the Lannisters an excuse to harm his sisters.

On the field there is a woman who is helping the injured. Robb wants to know who she is-she tells him her name. Rob tells her that when he kills Joffrey he will go home to Winterfell.  He has no desire to be King.  She does not believe him and leaves.

Joffrey is holding a bow and arrow and tells Sansa that she has to answer for her brother Robb’s crimes. He threatens to kill her but then tells her his mother insists she stay alive. He says he will have to send a message another way. He tells the soldier not to hurt her face he likes her pretty: his soldier beats her and rips her clothes off preparing to flog her.  Tyrion walks in and ask what the meaning is.  He asks the soldier who hurts a girl.

Tyrion calls Joffrey a half-wit. His soldiers tell him that no one threatens the King when the Kings guards are there. Tyrion tells them he is not threatening the King he is teaching him.  Tyrion goes to Sansa and gives her his hand and helps her up. He apologizes for his nephew’s behavior. He asks if she wants to end the engagement.  Sansa insists she is loyal to Joffrey.

Joffrey then hands the girl something else – his sceptre – to hit the other girl with.  The girl begs him to let it stop.  Joffrey tells her when she finishes hurting the girl she will bring her to his Uncle’s quarters to show him what is what and if she doesn’t do it the same thing will happen to her,

Renly gets back to the camp and Petyr is there and he asks Petyr since when does he do the Lannister’s bidding.  Renly tells Petyr he does not like him and wants to know why is there.  He tells Petyr, Brienne who is there is trustful and Petyr can talk in front of her.

Petyr tells them he has many friends at court.  Petyr tells Renly that when he marches on King’s Landing he could find a siege or an open gate.

Petyr speaks to Margery, Renly’s wife and asks who was by Renly’s side on their wedding night.  Margery asks Petyr if he has ever married.  He says no – and she responds it is a good thing because he does not seem to understand what marriage is. She shows him to his tent.

At the red waste Daenerys’ man has got back and he tells Daenerys about a place he found.  She asks Jorah about it.  Jorah tells Danys that every time the  Qarthiens closes their gates to travelers ‘the garden of bones grows.’

With Joffrey’s guards – Arya and Gendry have arrived at Harrenhal,.  There are many dead people and it smells horrible.  One of the people already there tells them they take one person every day to kill.

Catelyn comes to see Petyr accuses him of betraying her and Ned.  Petyr says he has loved her since he was a boy-she takes a dagger and threatens him and tells him to get out. He asked her if she wants to see her girls again, Sansa is more beautiful than ever and Arya just as wild as ever. He tells her both girls are healthy and safe for now.  He tells her he fears for their longevity if they remain the capital.

She wants to know what he wants? He tells her they will trade her daughters for Jaime Lannister.  She lets him know Robb would never agree. He tells her he has brought her a gift from Tyrion-to show that the offer is made in good faith. They bring in the chest – she opens the chest.  He tells her her husband was an honorable man and he should rest in the crypts beneath Winterfell.  She tells him to get out.

Arya and Gendry are sleeping and they are being roused awake.  The man who picks the person who will be killed that day comes up to all children-he picks a child and takes them.  Neither Arya or Gendry are chosen.

They tie the boy up and question him-he tells them he does know the answers to their questions. They keep asking him where the brotherhood is-they want to know which villages aided them. They take are rat and  put it in a bucket and put it on his chest they light the bucket on fire so that the rat will eat through him to get out. She tells him what he knows but they won’t stop torturing him.

Renly, Carelyn meet up with Stannis and Renly wants to know if the girl with him is the fire princess.  Renly is surprised he never thought Stannis was a godly man.  Catlyn tells them if they were sons of hers she wouldn’t lock them in a room and let them knock each other out.

Stannis is surprised that Catlyn is next to his brother Renly.  He says the Starks supported his claim to the throne. Renly tells Stannis no one wants him as their King.  Renly tells him a man without friends is a man without power.

Stannis tells him he will give them the night to give up.  Melisandre warns him that Stannis will win.  Renly says to Catlyn: “can you believe I loved once?”

Daenery has arrived at the gates of Qarth- Daenery introduces herself to the people who meet her.  They tell her they call her the mother of dragons.  He tells her he is the merchant of spices and the protector of Qarth.  They asked to see Daenerys’ dragons.  she ignores this question and tells him she has traveled really far and her people are hungry and once her people are fed she will show it to them.

Daenery tells them if he does not let them in they will all die. He tells her he will truly regret it.

Jorah warns her to be careful. Daenery tells them when her dragons are grown she will take back what was taken from her – she tells the 13 that if they turn her away  she will burn them first.

One of the 13 disagrees with the spice merchant.  He feels they can let them through the gates and survive.  The Spice Merchant tells him the decision is final.  One of the 13 invokes a special rule and he takes responsibility for them.  He welcomes Daenery to the city.

Today the guards choose Gendry to torture and they tie him up and asked where the brotherhood is. They go to get the rat and put it on his chest. They hear a noise and the head of the soldiers shows up and wants to know why the prisoners are out of the jail.  He asks if they are so well manned they can discard able bodies.

He asks Gendry if he has a trade and he says a Smith.  The soldier comes over and tells Arya not to look.  He goes to kill Arya and the head of the soldiers stops him. He lets them know Arya is a girl. He tells the soldier to being him to her – she will work for him.

Cerseil sends Lancel to Tyrion to demand that he release Pycelle,,  Tyrion realizes that Cerseil must have great confidence in Lancel.  Tyrion asks if he was knighted before or after Cerseil took him to her bed.  Tyrion threatens to tell Joffrey that Lancel was sleeping with his mother.  Tyrion tells him he won’t tell as long as Lancel spys for him.  Tyrion agrees to release Pycelle,in the morning and tells Lancel to go and tell her.  He will start spying for Tyrion.

Davos Seaworth is not happy with what Stannis wants them to do – he is in a boat with Melisandre heading for  cave.  Stannis wants Davos to smuggle Melisandre ashore for some secret purpose the night before they go to war with Renly.

They are in the cave and Melisandre takes her clothes off and she is pregnant.  She tells him there is only one god and he protects those who serve her.

She lies down on the ground – she is in labor and out comes a demon. She has given birth to a demon!  Yikes – Some kind of black oil smoke creature thing