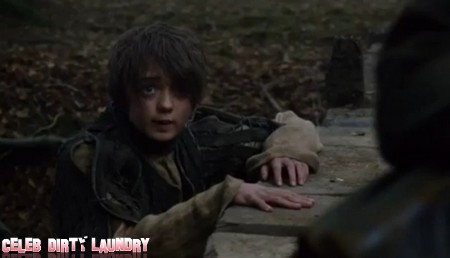 HBO’s hit show Game of Thrones returns tonight with a whole new episode called ‘Night lands.’  Stand by as we live blog the episode with the up-to-the-minute details.  On last week’s show Robb Stark and his northern army continued the war against the Lannisters. On the island of Dragonstone, Stannis Baratheon ploted an invasion to claim his late brother’s throne. Across the sea, Daenerys, her three young dragons and khalasar trek through the Red Waste in search of allies.  If you missed the episode you can read our full recap here!

On tonight’s show Stannis uses Ser Davos to seek out new allies for his war with the Lannisters.  Davos elists Salladhor Saan, a pirate, to join forces with Stannis and Melisandre for a naval invasion of Kings Landing.  On the road north, Arya confides in a Night Watch recruit, Gendry. After nine years as a Stark ward, Robb Stark sends Theon Greyjoy to win an alliance with his father and his sister Yara and the fierce warriors of the Iron Islands.

In the wake of a bloody purge in the capital Tyrion chases Cersei for alienating the kings subjects.Cersei and Tyrion clash on how to rule in King’s Landing.  This episode was written by executive producers David Benioff & D.B. Weiss and directed by co-executive producer Alan Taylor.

Tonight’s Episode:  Tonight’s show opens with Ayra sitting by a stream, she has escaped from King’s Landing and she has cut her hair and they think she is a boy – she is travelling with one of Robert’s illegitimate kids Gendry, the blacksmith’s apprentice.

The mysteriously Jaquen H’ghar tries to befriend “Arry” through the bars of his cage, apparently amused by her bravado. However, their budding friendship is cut short by his barely-human cagemates. Arya gives up on chatting with him after one of them threatens to sodomize her with a stick.

Guards are passing and Ayra ducks down and tells them that they are looking for her.  The guard tells Balon he has a Royal warrant for one of the Royal gutter rats that he is carrying.  Yoren tells them that the gutter rats are part of the Night Watch and they can just leave.  He manages to send the two riders off by threatening them with a single knife.

Tyrion Lannister comes in and Varys tells him that they have heard how hard he fought.  He lets Tyrion know that even though his father was not happy that Tyrion brought a Shae with him he is good at keeping secrets.  Tyrion tells Varys he does not like threats.  He does not have honor and if he felt like he was threatened again he would throw Varys in the sea.  Varys tells Tyrion to be careful, he always comes back.  He tells Tyrion that the Queen is waiting for him.

At a small council meeting -the council receives Robb’s demands, but Cersei is having none of it.  Cerseil, Tyrion and Varys are meeting and their cousin is telling them about Jamie Lannister and passing along Robb Stark’s message.

Then the council receives a letter from the Night’s Watch begging for more men because the dead are literally rising and that’s the kind of thing everyone should be concerned about. Vary tells them the Wildings have stopped fighting among themself and they are following another King now.

Tyrion tells Cerseil that the Nights Watch is the only thing that protects them from what is beyond the Wall.  Samwell Tarly is with the Night Watch he sees a wolf threatening a girl and he chases the wolf away.  She tells him he cannot touch her and tells him he is very brave.  Jon Snow is sharpening his knife and Samwell comes over and introduces one of Crastor wifes, Gilly – she is pregnant and she wants them to take him.  She tells Jon she is pregnant and if she is having a boy… she will not tell them what will happen and Jon tells her he cannot help her if she does not tell him what will happen.  Jon is worried they are heading further and further into Wilding territory and he does not want to take the girl with them.    Jon tells Samwell they cannot help the girl.

In the red waste dessert with Daenerys Targaryen her people and her are still starving –  a horse with no rider shows up with a sack on it and a severed head is in the sack.  She is told that the person who did it is not happy with a women leading the Khalasar.  Daenerys says they will not like it when she is done.

Littlefinger owner of the brothel is told by a customer that he barely touched one of the prostitutes and yet she is crying.  Littlefinger explains that he was offered a lot of money to be able to use the girl the way he wanted.  He threatens a sobbing Roz and gives her the night off and tells her to come back tomorrow and be happy.  She is upset because of her baby that Joffrey had killed.   Littlefinger basically tells her to suck it up and start working again.

Tyrion questions Janos Slynt head of the City Watch about trouble in Littlefinger’s brothel.  He wants to know who ordered that male babies be killed.  He wants to know if when Ned Stark’s men were slaughtered Janos made the order.  Janos feels Tyrion is question his honor and he calls Tyrion an imp.  Tyrion gets really pissed and tells Janos that he does not trust him and since he betrayed the last hand of the King he does not want him near.  He tells Janos there is a ship leaving for Castle Black and he is going there.  Bronn the new commander of the City Watch takes Janos in custody.  Tyrion toasts Bronn the new City Watch commander.

He asks Bronn if he asked him to murder an infant girl at a mother’s breast would he do it without question.  He replies: ‘No I would ask you how much.’

His father takes the offer from him.  He reads that he has to destroy Robb Stark’s enemies and Robb Stark will make Bailson Greyjoy king.  The women who brought him to his father comes in and he finds out that the women is his sister Margery.  His father tells him his sister has commanded men and killed men and she knows who she is.  He tells his son no man gives him the crown he will take the crown that is who he has always been.

Davos Seaworth offers the pirate, Salladhor Saan, money to be an ally.  The pirate says he will sail with his fleet as long as he can have the Queen Cerseil.  He is told Stannis is the rightful King of Light -Davos tells the pirate if he can get him to the Gates Of Kings Landing he will give him gold but cannot promise him the Queen.

Cerseil is pissed at Tyrion – he tells her she is losing the people.  He tells Cerseil she made a big mistake slaughtering all the babies.  Tyrion realizes that Cerseil did not give the order to kill the babies – Joffey did.  Cerseil tells Tyrion he is funny but none of his jokes will match the first when he came out of her mother and she bled to death.  He tells Cerseil she was his mother too.  Tyrion thinks Cersei is incompetent  her ideas might not be terrible, but her inability to control her son Joffrey is a major problem.

Davos tells Stannis that the pirate will join their fleet.  Stannis asks if Davos trusts him – he tells him once he gets his smell of gold he never stops.

Jon Snow is walking in the forest and he hears a baby crying he runs with his sword out and he falls and he realizes now what Crastor does with his baby sons.   He sacrifices them to the cold one – He now knows why Gilly wanted to run away from Crastor.  Snow runs to save the baby. Crastor comes up behind Snow and hits in the head and knocks him out.