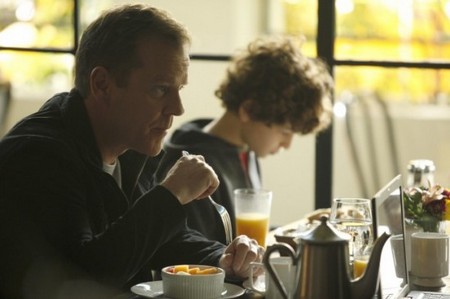 A couple managing an online instrument repair business work with an Iraqi heavy metal band that has a teenage follower who is looking to share his comedic talent with an American soldier (guest star Sprague Grayden) in Baghdad.   If you missed the episode you can you read our full and detailed recap here!

On tonight’s show Martin gets his laptop stolen on the day Jake is scheduled for an important evaluation. As a result, he becomes ensnared in a young Salvadoran woman’s quest to avenge the death of her family. Meanwhile, Teller (guest star Danny Glover) tries to reconnect with his estranged daughter.

Also, a spirited Saudi Arabian girl tries to break free of the societal constraints imposed on her and a Montreal doctor attempts to meet a stranger on a train.

RECAP: The show stars off with a Saudi Arabian girl who is in a room with her dad and another man, the moment the two walk out of the room, she takes off her robe and texts to someone on her father’s cell phone that she will not be marrying some guy. A guy that is lost in NY city asks a to guy him directions, the guy steals his wallet and sees a photo with a little girl inside, he feels guilty and returns the wallet. A girl is in a subway and doctor is behind looking at her, he follows her out the subway. A girl is at church lighting a candle.

Martin is at lunch with his son Jake, Clea is really happy to see the two of them bonding and thinks the evaluation committee has to see the same thing. Today is the first in a series of evaluations to see who gets custody of Jake. Martin mentions Jakes mother to Clea and Jake gets visibly upset and knocks stuff off the table.

Martin goes to see Teller and tells him that he is starting to understand the numbers and today the best thing for Jake is to be his dad. Teller disagrees, he thinks it is best for Martin to follow Jake’s road map.

In Saudi Arabia, the girl is now out in the car, she picks up her friend and tells her they should dress like boys because they get all the choices.

Jake made a pattern out of sugar packets, Teller is figuring out that the number Jake wants to convey to Martin is 22. Normally Martin would be thrilled, but he feels that Jake is now making it harder for him and he doesn’t understand.

At the hospital, the doctor who was in the subway, he tells another doctor that he couldn’t approach the girl, he was too shy. His co-worker tells him to take the jump and talk to the girl or he will end up marrying someone his parents want him to marry.

The two girls in Saudi Arabia are dressed like men and driving in a car when a woman runs in front of the car and screams that “it’s coming”.

The same pickpocket that took the man’s wallet and returned it, steals Martin’s computer. Martin gets on a bus to chase after the guy who manages to get out of the bus, but Martin doesn’t, he sits down and then a women beside him pulls a gun on him.

Martin’s cell phone rings, it is Clea and she is wondering where he is. Martin needs to get off that bus, but the woman is not going to let him go.

The robber arrives to meet his daughter, he brings her a computer wrapped in a bow, it’s Martin’s computer. Meanwhile, her mother and her new husband bought her a car.

The doctor is in the hospital, a couple’s son has leukemia and they need a donor. He needs to check the donor list and get a match.

Teller is in the hospital, he is talking to a nurse and tells her that he slipped in the shower and hit his head, it’s his daughter he is talking to. He tells her about Jake and she doesn’t want to hear about it. He wants to get a hold of a scanner, she wants nothing to do with it. She tries to get him to see a doctor, she thinks he is seeing thinks that are just not there.

In Saudi Arabia, the two girls picked up the hysterical woman, she is about to have a baby.

Martin begs the woman to let him go, she tells him that she is going to shoot him and Martin tells her to go ahead or he is going to talk. She explains that there is a guy on the bus that killed her father and her five year old brother, the man who did it is sitting at the front of the bus and she wants to balance the scales.

Clea is trying her best to negotiate with the evaluators who are upset that Martin didn’t show and Jake has shut down.

In Saudi Arabia, the girls have run out of gas, the woman who is in labour tells them her husband is away on business and asks for their cell phone so she  can call him.

Martin is on the bus, he is trying to convince the girl to give it up. He tells her about his wife being in the towers on 911 and how she called him that morning and he couldn’t get to the phone. She tells Martin that she followed him, she knows where he lives and she has nothing to lose.

The woman speaks to her husband, she is hysterical, he is not paying attention and walks right in front of the bus. It gives Martin enough time to alert the man that the woman wants to kill him. The guy grabs Martin and demands to know what he is talking about, Martin explains but sees that the guy has the numbers 22 tattooed on his neck along with some other numbers and symbols. The girl catches up with them, but there are fireworks which startles her, the man runs and the girl runs into the street and the girl gets hit by a vehicle.

Back in Saudi Arabia again, the woman is still in labour and the girls brother arrives, it is actually not her brother but her father and he is furious. She tells her father that we either define our fate or we are defined by it, he asks her where she learned that and she tells him from him.

Clea calls Martin and tells him that the evaluation is over, Martin is at the hospital and goes into the chapel to read verse 22 which is about not taking advantage of children.

In Saudi Arabia the baby is born and the woman refuses to drive in the car with them to go back to the city because they have brought shame to their families in dressing up as men.

The doctor in Montreal is still trying to find a donor and missed his chance to meet up with the girl.

Martin meets up with the man who the girl was going to kill on the bus, he wants to know why he had the bible verse on his neck. The men explains that they were at war, they didn’t kill the children, they took them to a mission in Canada.

Martin is at the nurse’s desk (Teller’s daughter), he sees something on the screen it is a weird symbol that Jake was trying to show him. The computer screen has the name of a child who needs a bone marrow transplant and Martin is convinced that it the girl on the bus’s brother and he was spared the day her father was killed, he begs her to take a leap of faith.

The doctor in Montreal found his donor and runs to catch the subway, he discovers that he has the wrong bag and is upset. Just then he sees the girl, it is raining and she broker her heel, he offers to buy her a coffee and covers her with an umbrella.

Martin goes to see Jake, he is still awake. Clea takes Martin to the side, she tells him that they want to transfer him. She urges him to give her something to work with, or they are going to take him away.

Back in Saudi Arabia, the girls father is about to turn down her arranged marriage’s father, but his son has met a girl and he cannot marry her, so the girl is broken off from this arranged marriage.

Martin is going through some stuff and he finds a tape that his wife recorded for her son.

At the hospital, the boy gets the bone marrow and meet his sister for the first time.

The girl in Saudi Arabia wants to go to New York and her father agrees.

Clea walks by Jake’s room and hears his mother singing on the tape, Jake turns around and smiles at his dad.

The End! But where are the Asian girls?