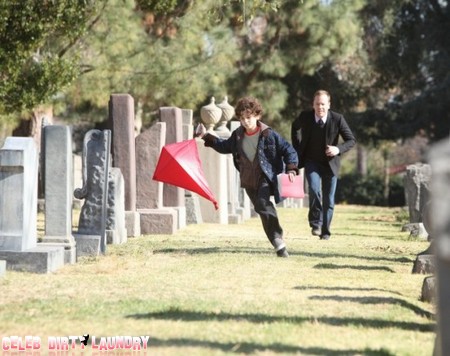 FOX’s new drama starring Kiefer Sutherland, TOUCH returns tonight with a new episode called ‘Kite Strings.’  On last week’s episode Martin comes in contact with a homeless man who possesses the same obsession with numbers as Jake, he sets out on a series of seemingly unrelated tasks that connect an abused African woman, a group of African boys entering a dance competition and an outgoing woman at California’s Costabella Festival.   If you missed the episode you can read our full recap here!

In tonight’s show Martin crosses paths with a young man who has a history with his deceased wife, Sarah. A couple managing an online instrument repair business work with an Iraqi heavy metal band that has a teenage follower who is looking to share his comedic talent with an American soldier (guest star Sprague Grayden) in Baghdad. But the soldier has troubles of her own when her convoy is ambushed, forcing her to hide in the Iraqi desert. Then, a lottery winner comes upon a depressed pastor.

Meanwhile in other Kiefer news – he is as excited about getting the “24” movie made as fans of the show are to see it. It’s just taking longer to come together than anyone had hoped. Good news for fans Kiefer said everything is ironed out and all that is left is to get everyone’s schedule coordinated.  YAY, I cannot wait!

RECAP: Martin receives a letter from the Department of Health and heads out the door. A man is sitting on a bench outside a church and the paper beside him reads that they are still looking for a lotto winner, meanwhile the man has a lotto ticket in his hand.

Martin goes to see Jake, he tells Clea that he got news today that Jake’s mother cannot be identified as dying in the World Trade Center, they have stopped looking. Martin tells Clea that at the time, he thought he had all the time in the world. He wants to take Jake to the cemetery, but he is afraid it is the wrong place for Jake, Clea disagrees and thinks he should bring him there.

At the cemetery, Martin talks about Jake’s mom then Jake begins to run. They arrive at her grave and find a black man, his name is Bobby and he knew Sara, Martin’s wife. Jake runs off to catch his kite, Martin runs after him and starts to tell him about Bobby. Jake drops a book with numbers, then he lets go of the kite. Jake starts to follow the kite and so does Martin.

Martin and Jake don’t find the kite and Martin tells him he is going to take him to a toy store to get another one. 9.5 is the number that Jake was writing in the book and Martin thinks this is a new clue. In Baghdad, a teenager is looking to share his comedic talent with an American soldier.

In charge, a priest is reading of prayers from the bible and the guy who was sitting on the bench with the lottery ticket is inside. He talks to the priest when he leaves and tells him that he didn’t get any answers in church.

Jake forgets to look both ways when he crosses the street, but Martin catches him just in time. Jake is walking fast and Martin tries to keep up to them, they come to an apartment, it is number 65. Kids run threw the hallway with a ball and hit th4e door, the 6 falls down and turns to a 9, a man opens the door and it is Bobby from the grave site, he says, “you’re following me”.

In the church, the lottery winner is with the priest and he tells him that he has a lot of money and doesn’t know what to do with it. The priest tells him that his father always wanted to put an addition on to the church but he never had the chance. They share stories then the lottery winner tells the priest that he wants to make amends because he thinks he may have killed someone.

In Iraq, a female soldier is in a truck with other soldiers and they are ambushed. She tries to take one of the wounded and hide.

Jake runs into Bobby’s apartment and finds a photo of a little girl, her name is Sarah. Bobby goes on to tell Martin that his wife Sarah tutored him to get his GED and changed his life. He also goes on to say that Sarah didn’t wear her wedding ring and suggests that she and Martin were having marital problems. Martin is beside himself and jumps Bobby, but quickly let him go.

Bobby tells Martin that they were telling people that they should stay inside stay in their offices and he knew that he should have helped Sarah get out,

Bobby froze and he will never forgive himself and he apologizes to Martin.

Bobby’s wife comes in and she asks who they are and Jake goes into another room and locks himself in.

Her name was Sarah Belle and he carried her down 31 flights of stairs – she kept saying Martin and Jake and he wondered if Jake and Martin were in the towers. Then he thought she was not breathing or at least he told himself that. Truth is he could not carry her anymore he wanted to save himself. He is so ashamed. He cannot change what he did. He just wanted to move on so he just started to obsess about the numbers the flights etc. Then he felt if he used the numbers to win the lottery he would be able to move on. He won but he still does not feel any different.

The pastor lets him know he may need time. The Lottery Winner tells him he needs something to occupy him.

The female Iraqi soldier is helping an injured man and she is helping him – she is hiding in the woods with the soldier.

The Bagdad teenager is writing to find out how to get his guitar working so he does not blow things up. The person who owns King Roadie site gets the e-mail and is excited and gives him advice.

The teenage comedian is talking about Chris Rock and someone tells him if he does not get his own voice he will only be a parrot.

Bobby’s wife finds out that Bobby names his daughter after Sarah that tutored him and is shocked. Martin breaks in the room Jake is hiding in and Jakes goes out the window and climbs up the fire escape because he sees his Kite which is attached to a satellite and blows the internet connection of King Roadie who is trying to write to the kids in Bagdad.

Something falls on King Roadie’s key board – he types 95 volts but the thing that dropped change the volts to 950 volts and the message is sent.

Bobby comes out and is going up the fire escape after Jake. Jake is crawling hire to get the kite.

Bobby is trying to convince Jake to come down from the fire escape, but he almost falls and Bobby catches him just in time. Jake freaks out because Bobby is touching him, he lets go. Martin tells Bobby that he just repayed his debt to Sarah, he saved her son’s life.

In Baghdad, the teenagers set the amp to 950, one of the boys thinks it is a little high but they go with it anyway.

The soldiers are still in the Iraqi forest, but getting more tired. The teenage metal band zaps the power and sends sparks into the sky which lights it up and the Iraqi soldiers are nearby, the light helps the rest of the soldiers visualize them.

In the church, the lottery winner and the priest are stuck in the basement. The priest tells the winner that he envies him because he had a sign, when he choose those numbers.

Jake is back in Bobby’s apartment, Bobby tells Martin that September 5th was the last appointment he had with Sarah, again the 9.5.

The priest is trying to break the window in the basement when a guy starts calling for him from upstaird and comes down to rescue the two, he tells the priest that he has a phone call from Iraqi. It is Lori, she has been hurt, she tells him that his words telling to take one step at a time saved her fellow soldier’s life, no matter what happens to her. He promises her that he is on his way to see her, the church doesn’t need him anymore, he has been given a sign.

The teenagers are looking for Lori Davis, the soldier who they were friends with and another soldier tells them that she is gone, she was hurt. The boys still want to audition.

The lottery winner takes over the church and makes repairs, the priest is in Baghdad with Lori, Bobby is happy at home with his family. Martin goes into Sarah’s closet and finds her agenda, he scans through it and finds the last entry was tb jewelers. Martin heads over there and finds his wife’s ring, she wasn’t wearing it because it was getting engraved, one + one equal three.

That is it for tonight, anyone know what happen to the two Asian girls???